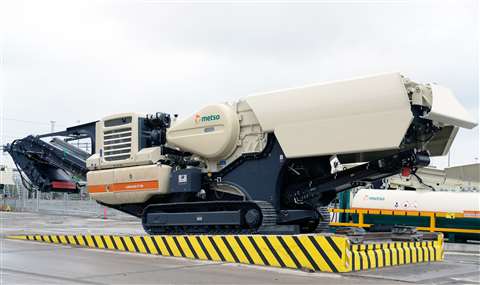 The freeze-proofed Lokotrack LT106 jaw crusher plant will begin crushing icy basalt for the extension of the McMurdo research station as of next February.

Metso is delivering three Lokotrack crushing and screening plants retrofitted for extreme cold weather for the reconstruction of the US National Science Foundation’s (NSF) McMurdo research station in Antarctica. The equipment enables crushing in temperatures as low as -40 °C.

McMurdo Station, located on an island in the Ross Sea, is the US Antarctic Program’s logistics hub and the largest of its three stations on the continent. McMurdo is being rebuilt under the Antarctic Infrastructure and Modernization for Science (AIMS) project, a long-range initiative to upgrade the station to make it logistically and energy efficient.

Metso’ equipment will be used for three years in crushing the ground materials for the new buildings. All in all, this will amount to more than 126,000 cu m (4.4 million cu ft) of aggregates.

In the extreme conditions of Antarctica, the equipment can only be used during the Southern Hemisphere summer, which lasts from October to April. The hard basalt to be crushed will come from an area near the station.

The Lokotrack equipment was procured by Leidos, the NSF’s prime contractor for the Antarctic Support Contract as well as the AIMS project. The seller was Wagner Equipment, a Metso distributor in the United States.

The equipment to be delivered to Antarctica comprises the Lokotrack LT106 jaw crusher plant, LT200HP cone crusher and the ST3.8 mobile screen.