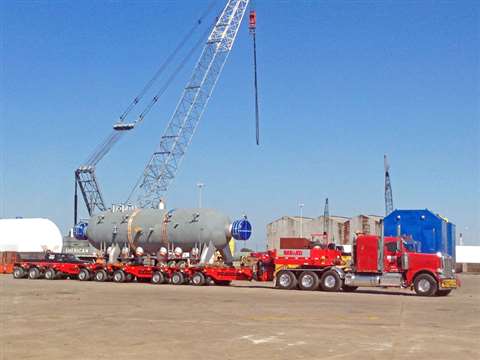 Faymonville has made several deliveries of its HighwayMax trailer to USA-based transport companies.

The extendable on-road heavy haul HighwayMax trailer has nine hydraulically steered pendular axles and a technical payload of 118 tonnes. It is compatible with US and Canadian regulations, the manufacturer said. Transport companies Berard Transportation and Steve Sharp transportation have taken deliveries of the new trailer.

Brett Berard, Berard Transportation vice-president of operations, said, “The Highwaymax trailer is advantageous in routine projects due to its superior spine strength as well as overall capacity. We are capable of transporting concentrated loads that would typically be moved on conventional platform trailers with a much simpler arrangement.”

Steve Sharp, Steve Sharp Transportation, said, “The operation of HighwayMax is very driver friendly. The tare weight is good so that we can get an excellent payload. The manoeuvrability of the trailer is just unbelievable, how it follows the truck around a corner. We want to add more Faymonville trailers to our fleet.”

The trailers were delivered by Hale Heavy Haul, the official US representative and sales agent for Faymonville.