Over the course of 2020, La Grange Crane mixed and matched its fleet of cranes for Walsh-Fluor Design on the Chicago Transit Authority RPM project. The project is part of a multi-phase modernization program to bring the Chicago Transit Authority’s (CTA) red, purple and brown lines up to speed. The project will show how a century’s worth of rail infrastructure can be replaced without impacting millions of daily commuters. This full-scale infrastructure project sweeping through Chicago’s northern neighborhoods has a price tag of $2.1 billion dollars, the largest CTA project ever. 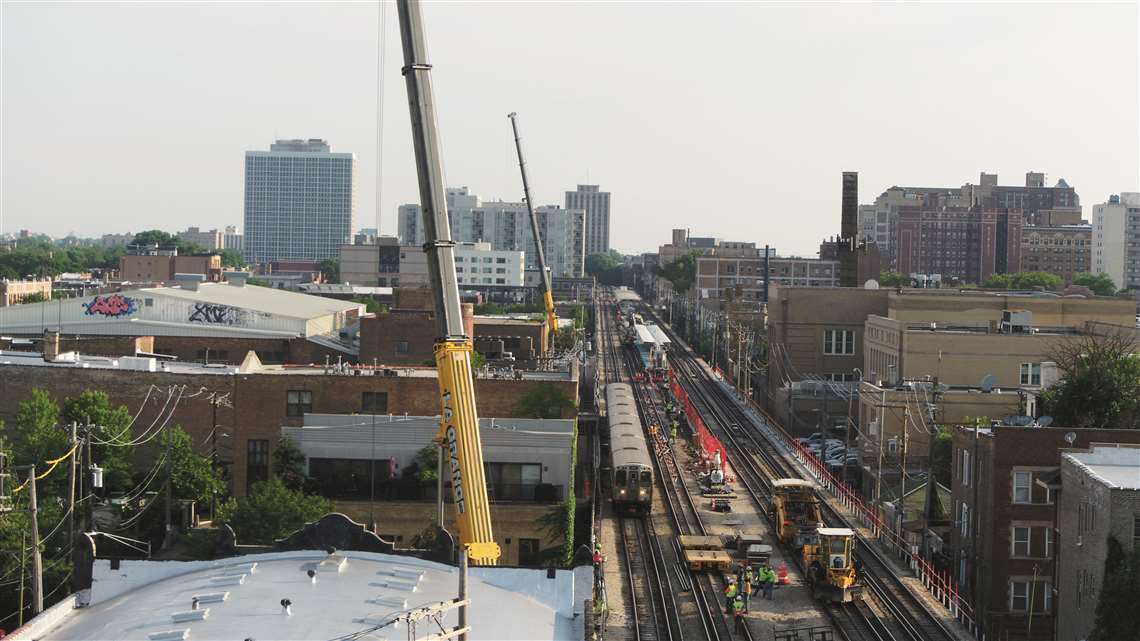 The most challenging lifts revolved around setting the relay houses for the new railway’s operating system.

Delivering, for the CTA and Walsh-Fluor, is a bit more complicated. The RPM corridor is a 9.6-mile stretch of track originally built in 1924. It is flanked on both sides by a century of urban development. Chicagoans rely on the commuter lines to make a living. Turning over four active tracks does not happen overnight. In fact, it happens over the course of many nights, with a similar stop-go-stop-go approach you might experience on the 09:10 from Loyola to Bryn Mawr.

The project’s success, and the public’s opinion, rests on Walsh-Fluor’s ability to make incremental progress while maintaining a safe and comfortable morning commute for the nine-to-fivers.

La Grange Crane Service has been a participating member of the RPM team under Walsh-Fluor from Day One. The last year has resulted in dozens of crane mobilizations to a handful of constrictive locations. La Grange Crane is a complementary component to the teams of Walsh, Railworks Track Services and Meade Electric who are responsible for the removal of existing track, implementation of new electrical components and installation of new tracks.

Setting up cranes in tight locations is a hallmark of the project.

“Safety is the key component for the CTA,” said Joseph Mollo, sales operations manager for LaGrange Crane. “There is restricted access on every jobsite.”

Many different aspects of the modernization project take place concurrently. Walsh- Fluor has assembled a troop of talented engineers to oversee various scopes of work under the direction of Project Manager Rob Cheeseman.

“La Grange Crane Service’s ability to consistently deliver crane safety documentation to all-hands on deck is fundamental in allowing subcontractors to work according to the site’s distinct plan,” added Mollo.“However, it cannot happen without the trust and communication of exceptional partners.”

This large-scale infrastructure project takes place in the heart of Chicago. There have been dozens of mobilizations of different crane sizes because there are no areas for a crane to stage.

All La Grange Crane’s IUOE Operators underwent rail safety training through the CTA so that La Grange could safely dispatch any crane size to the project based on the scope being performed for that specific mobilization.

“Our first mobilization took place in winter of 2019 and is still ongoing,” said Mollo.

La Grange Crane selected the appropriate crane based on the specific mobilization’s hoisting needs factoring in capacity and effectiveness. All cranes utilized are mobile hydraulic cranes for onsite versatility and their ability to access restrictive setup locations in the City of Chicago. Walsh Group maintains a 75 percent capacity restriction to size the cranes properly within their safety protocol.

The most challenging lifts involve setting the relay houses for the new railway’s operating system. They included using the GMK 5250L for the Loyola setup, the GMK 7550 for the Berwyn setup and the GMK 7550 with the mega wing configuration for the Thorndale setup. La Grange Crane supplies rigging materials such as straps/shackles, lifting beams and the like. On the three relay house lifts, fully engineered rigging plans were developed.

“Location and accessibility are the largest challenge to lifts on the CTA RPM,” Mollo said. “The Red Line is required to remain open and servicing commuters through the project duration. Therefore, most of the lifts occur overnight, or on weekends, with limited pre-determined lift windows to minimize impact on operation trains.”

Setup locations are often on city of Chicago streets requiring full or partial closures with traffic control. Due to Chicago’s history of vaults, ground penetrating radar was utilized at several locations and continues to be important for future mobilizations.

The CTA RPM project is slated for completion in 2025. For more information, please see the following video:

Jim Smith Contracting employed a fleet of Link-Belt cranes for the bridge project along U.S. 60.

Serving as a vital gateway for transportation in the region, the Kentucky Transportation Cabinet deemed the 89-year-old bridge functionally obsolete/structurally deficient and set out to revive this crucial route for U.S. 60 traffic in west Kentucky. The JSC team started work in the summer of 2020. The land-based substructures for the approach spans of the new bridge are nearly complete and the contractor has started setting pre-cast concrete girders. The 700-foot main steel truss span is currently being manufactured with an anticipated set date of September 2022. The project has not been without challenges, mainly Mother Nature. Seasonal flooding was a huge factor.

“This river fluctuates as much as 30 feet through the course of the season,” said Jim Smith owner Rex Smith. “It was crucial to get ahead of what we know is a wildly fluctuating river that floods from the beginning of March to the middle of June.”

The contractor team put a lot of equipment and resources on the job to try and beat the river status. But flood waters weren’t just the only problem.

The area of the bridge is a mecca for barge traffic due to rock quarries upstream from the project. Loaded barges are sent downstream all the time, and due to the curve of the river and the slewing, the barges often take up the entire channel. When it’s time to erect the truss and demolish the old bridge, barge traffic will come into play.

To attack the job, Jim Smith broke operations down into a north project and south project. On the south side of the river, the team utilized two Link-Belt crawlers, a 248 and a 138. On the north side, two Link-Belt 138s and a Link-Belt 298 are at work. A Link-Belt RT-8065 and a Grove RT890E served as support cranes. The team’s earthmoving fleet was primarily Caterpillars and Komatsu units.

For site prep, several thousand tons of limestone fill was brought in to build working platforms for the machinery. Large quantities of 12-inch crane mats were brought in to support the crane fleet for the project. The new Cumberland River Bridge is expected to be finished December 1, 2023. It will feature a 40-foot wide deck with 12-foot driving lanes and 8-foot shoulders.

Having past served in the Kentucky General Assembly, Smith understands the intricate nature of infrastructure in Kentucky. He is optimistic that on a national level, the Biden Administration will be able to put a program forward that will make infrastructure funding more sustainable that it has been in the past.

“There’s a lot of upside going forward, but it’s all going to be predicated on the commitment to funding,” concluded Smith.