A visitor arriving at AF Offshore Decom in the west of Norway will find nothing remarkable at first glance. Its compact headquarters building could be any company in any location.

Step around the back though and the difference is remarkable. The first glance there is likely to involve the remains of an old oil rig. 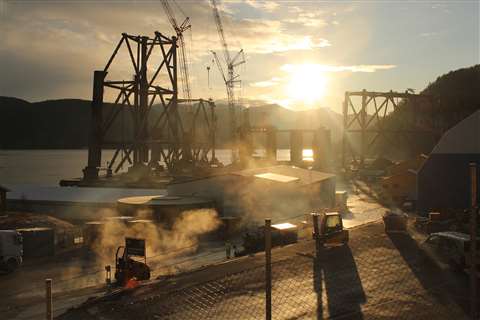 With the North Sea just beyond, it is not surprising that oil rig decommissioning is big business in these parts. And AF’s Environmental Base is just the place to do it. The word “unique” is often misused, but in this case it could well be justified. The company took the decision to build it here, taking advantage of deep water, calm weather and favourable tidal conditions, specifically to handle offshore installations. Being close to the open sea means there are no restrictions on what can be brought here, while the layout of the harbour provides a similar freedom when unloading.

It was not always like this, however. It was converted for demolition and recycling in 2005, more than a decade after the offshore business was set up. The statistics are impressive, with a 68,000 sq m (730,000 sq ft) processing area; more than 180 m (nearly 600 ft) of quay front. The water is 23 m (75 ft deep) at its closest point. Part of AF Gruppen, which in 2017 turned over revenues of NOK 13.7 billion (US$1.8 billion), it employs around 120 people. Given that Vats itself was a centre for oil rig building in the 1980, some of those 120 were responsible for creating the very platforms they are now busy dismantling.

The result has been engagement with some of the North Sea’s most famous names. When production on the huge Murchison platform ended four years ago, AF joined with Heerema Marine Contractors Nederland to agree its removal and recycling with Canadian Natural Resources International (UK).

In this case the AF project team decided to use two of the world’s largest heavy-lift vessels to remove the platform. This took place in 2016 for the superstructure – the platform had stood since 1980 but more than 35 years of history were removed and transported in three months – and the following year for the substructure.

It is a measure of the size of the project that recycling the platform will take three years, but then with a target recycling rate of 96% it is worth it.

The Ekofisk oil field cessation project was an even bigger deal. It involved 140,000 t of steel structures and nine platforms. It was the company’s third offshore project and such was the client’s confidence that AF prequalified for it two years before Vats opened, based on its method for demolishing onshore industrial plants.

At the time, the project was the largest of its kind for offshore installations in the North Sea. It too had a target recycling rate of 96%.

Different again were the removal of the H7 and B11 platforms. The H7 came first, in 2013, and AF found a new way of removing the platform offshore, using large cranes to lift the modules on to the deck of jack-up ship. When the commission came to remove the sister B11 platform two years later, the team was able to shave off more than six weeks removal time compared to the earlier project. 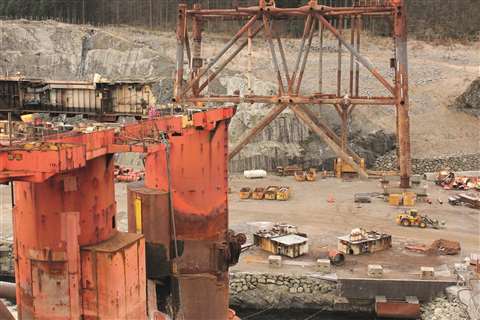 Aerial view of part of the site

Perhaps most iconic is the Janice platform, an 18,500 t rig that arrived in Vats in September 2016 and will be processed onshore before recycling.

AF said that it is the first time a semi-rig has been recycled in Norway using this method.

With a site the size of Vats, the equipment used on it has become the subject of special consideration.

AF has developed a strong working relationship with Volvo Construction Equipment (CE) machines, with the L120H and L350F wheeled loaders, EW210C wheeled excavator, EC380 crawler excavator and EC480E HR all being used. The company said the operators are very happy with Volvo machines and find them good to drive. The attachments used on site are also varied.

Lead times from starting a tender process to winning a contract can be long, but that has not stopped others from wanting a piece of the action. With a head start of more than a decade, competition is not an out and out threat for AF, but it has been a factor in bringing down the prices on some jobs. 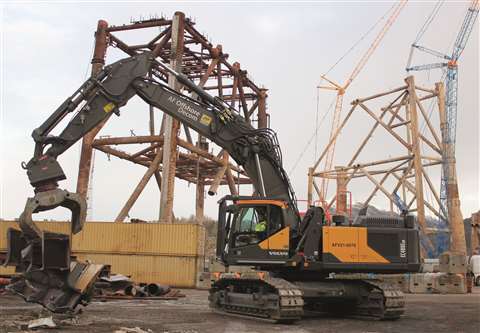 For the future, AF is already aware that taking the top of a platform and its jacket as single pieces rather than in modules will become the reality, possibly as early as next year. It is building a vessel that will be able to lift 20,000 t and this should be ready by 2020.

One major development for the future has already started.

Last August AF Offshore Decom UK signed the head of agreement with Forth Ports to establish a new joint venture called AF Dundee. It is named after the city in the north east of Scotland where Forth Ports is based and will be a UK North Sea oil and gas decommissioning hub.

The hub includes a £10 million (US$ 14 million) quay extension to handle large-scale loads.

*With thanks to Ola Malum, Per Inge Sandvik, Kenneth Hansen and Frode Olsen.

Taken from the March-April 2018 issue of Demolition & Recycling International. To see the full article, or to receive D&Ri on a regular basis, please visit www.khl.com