A team of eight Potain tower cranes are being used for a massive development project in Tampa, Florida, USA. The project, called Water Street Tampa, is a nine million square foot (836,000 square metres) mixed-use residential and retail development that will connect residents and visitors to area mainstays such as the Tampa Convention Center and The Florida Aquarium. 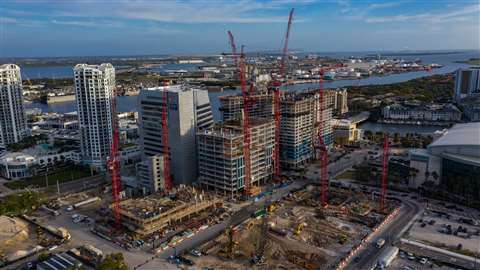 Eight Potain tower cranes are at work on a nine million square foot Tampa development. It will nearly double the number of housing units in the neighbourhood

The cranes for the Water Street Tampa project were provided by Maxim Crane Works, which owns the largest Potain rental fleet in North America, operating nearly 300 units from the manufacturer.