Generationsskifte Invest, a Denmark-based private equity company, has acquired 65% of the shares of TCA Lift. 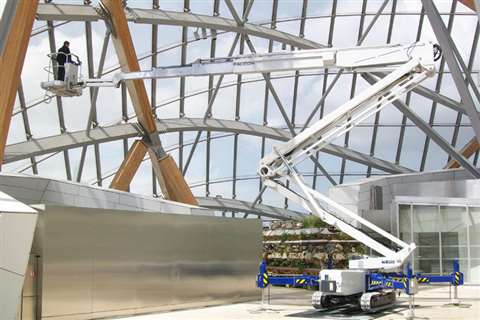 TCA Lift, also based in Denmark, manufactures the Falcon Spider range of tracked platforms and has its origins in E Falck Schmidt, the original company.

Finn Schlitterlau, CEO of TCA Lift said, “We have been looking for a partner who has capital and has helped develop companies by creating a renewed focus on increasing growth.

“Although TCA Lift has grown almost 100% since we took over the company in 2011, we also believe that the market is significantly larger. In addition, to strengthen our sales efforts, we will continue to invest in new lift developments that can solve our customer’s needs.”

Speaking of product development, Mr Schlitterlau adds, “It’s very simple, the lower weight and the more compact the aerial lift is, the more flexible the lift is. And these are the key performance aspects of the Falcon Spider.” The range consists of 29 m to 52 m working height machines.

Thyge Mikkelsen CFO of TCA Lift continued, “The Falcon Spider lift, which was originally invented by the original owner in the late 1970s, was the first of its kind with so-called spider legs.” He added that the company would continue to produce the Falcon range.

Jens Heimburger from Generationsskifte Invest said TCA products hold a strong position in the market due to increased urbanisation and evermore spectacular architecture, which require these machines. “It is also crucial that Finn and Thyge continue both as leaders and co-owners.”

As a result Mr Schlitterlau and Mr Mikkelsen retain 35% of the company’s share capital.

Generationsskifte Invest is part of Dansk Generationsskifte, which, since 2005, has specialised in small and medium-sized Danish companies. Following the transaction, Jens Heimburger, Enrico Krog Iversen, and Robert Spliid, from the company, have joined the TCA Lift board.