ReachMaster has introduced an anti-entrapment system for its compact lift segment.

Ebbe Christensen, president of ReachMaster explained, “We have witnessed how these systems saves lives and how Europe, and in particular the UK has adapted to these new systems on a larger scale. IPAF (International Powered Access Federation) with its roots in the UK has had a major impact on that development there and has also been instrumental in bringing the argument for these systems to North America. With our involvement in IPAF it has been a natural priority for us to add these safety features also to the compact segment.” Christensen was recently elected as the new chairman for IPAF’s North American Regional Council.

“We started to develop the systems with our European partners in a manner where the systems also could be available in North America for all models. As result we can now offer the option on all models from the ReachMaster Falcon and Bluelift range from 39 feet to 170 feet,” Christensen explained. 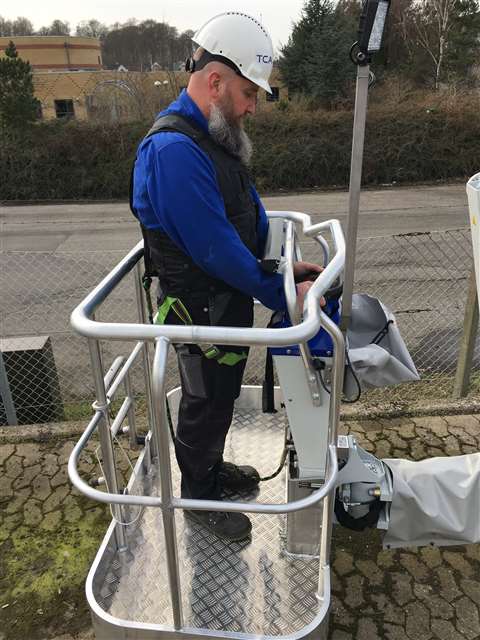 The principle behind the system for both brands is the same, Christensen said. It is simplified as an activation bar across the control panel and if pushed down by the body of the operator, the unit will immediately stop its movement and instantly move back in the opposite direction of its last operator input. At the same time, an alarm will sound at the ground controls, alerting people on the ground that there is a critical situation. If the entrapment situation rectifies itself by the automatic reverse movement, and the operator is safe and unhurt, the unit will re-set and the operational functions will resume and the operator can lower himself to the ground. If the operator is incapacitated or hurt and continues to lean on the bar, the unit will remain non-functional, only allowing the crew on the ground to lower the units through the emergency lowering systems.

As far as having the systems as standard equipment on the units or an option, Tom McKendree, national sales manager said, “We have decided that the customers should make that decision initially, so we will not offer it as standard, but rather a highly recommended option. That may sound contradicting to the purpose of offering the system, but one needs to remember the difference between a typical compact lift application and a main stream boom lift application. The majority of applications for main stream products are construction related where the environment is much more hectic, typical with a lot of other machinery in operation at the same time, higher boom speed and with unfinished conditions. All are elements that can easily distract an operator, whereas the compact units are primarily used in maintenance situations, where - given their very unique nature as lifts that can reach areas that no other lift can reach - there is an almost built-in higher awareness element when operating these units. Also, the boom and lift functions on a compact unit are typical slower than an outdoor boom lift, giving the operator a larger range of reaction time.”

On the question whether it will be standard equipment in the future, McKendree said that will be a likely development.

“It is one of those few situations where you can actually justify the question how much a life is worth when making the sales pitch to the customer, thanks to the very visual correlation between the option and its obvious benefits,” Christensen said. “The $ 2,500 extra that the system costs is a marginal price increase for a feature that can save a person’s life, so I think most customers will select it, which eventually will lead to implementing it as standard systems of all units. Volvo charged extra in the late 1950s when they launched seatbelts in cars; today it is a global standard and taken for granted by everyone.”

ReachMaster will be offering the system on both factory new units, but also as after-market kits that can be applied to most existing models.