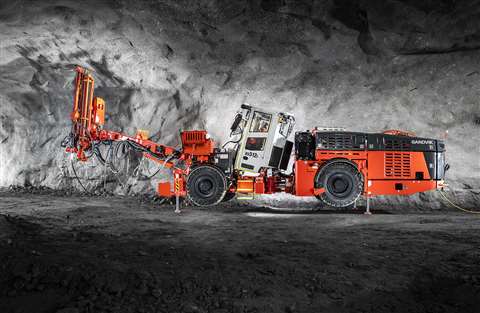 The company says the rig was designed specifically for tunneling and mining and was developed based on a modularised concept, leading to high levels of parts commonality with the Sandvik DT922i, reducing the cost of ownership.

The machine is equipped with a new carrier, high frequency rock drill, control system and an enhanced cabin, giving it, says Sandvik, improved levels of safety and efficiency.

Sandvik says the new rig offers 35% higher penetration rates than its predecessor, and features an upgraded bolting head, with different bolt lengths, plus an eight-rock bolt carousel, allowing for the installation of bolts from 1.6cm to 6m in length.

The DS512i is able to carry a 1,200kg cement silo and delivers increased meshing as well as hole angle measurement and a boom manipulator.

The new FOPS/ROPS cabin reduces noise, vibration and dust levels and promises up to 55% greater visibility than the previous model.

Sandvik says the rig has high levels of automation, which come in two packages: Silver and Gold.