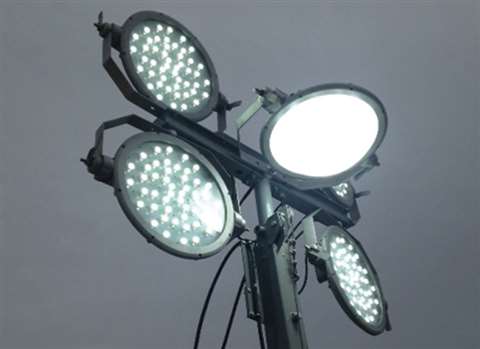 Light Tower Solutions also offers an LED solution for light towers with its Lexin-300 LED light. These lights can be used to retrofit an existing light tower, or used during the manufacturing process.

A rental company looking to expand its mobile lighting tower fleet now has more options than ever before.

The trend for LED models continues to grow – almost all manufacturers now offer LED lamps as an option – while alternatives such as solar and hybrid designs are also adding to the mix, and metal halide lamps are widely available.

LED models are proving popular, and with good reason. Tower Light is just one of the many manufactures highlighting the advantages – it said LED lamps offer a series of benefits to rental companies and their customers, including fuel savings, a longer life compared to metal halide towers, zero maintenance, and a lower cost for disposal.

The disposal saving is because metal halide lamps contain mercury, which is a highly polluting material, and additional charges are sometimes levied for safe destruction.

LED lamps can also be restarted while they remain hot, in contrast metal halide to lamps where an operator must wait up to eight minutes for them to cool before they will re-light. Tower Light pointed out that this could be a particularly important feature in the case of a black-out, for instance during a public event. In this case, any delay in lighting the area could extend the disruption.

As well as LEDs, many manufacturers are also integrating other new technology to their latest lighting towers. Tower Light’s LED VT1 300 W can be fitted with an auto light sensor or timing mechanism, for instance, which helps to ensure that the lamps are only illuminated when needed, saving fuel and emissions.

And Allmand now also offers an LED option for all of its four-light vertical light tower models. Along with the current standard features of Allmand light towers, it said the LED option offered many additional features, including allowing for instantaneous illumination and producing less glare.

“It is true that LED lights have a higher up-front cost compared to bulb-based lights, but the high efficiency of LEDs means that you will use significantly less energy and/or fuel in order to power them,” the company explained.

Indeed, Light Tower Solutions claims that its Lexin-300 LED lights – which can either be retrofitted or factory installed to light towers – can produce fuel savings of up to 40% compared to halide models. It pointed out that this also freed up generator power, allowing a company to potentially run more tools and equipment from the same generator.

Light Tower Solutions has also developed a MUCM box that will allow four to five light towers to daisy chain together.

Another manufacturer developing products to allow a string of lighting towers to be connected to one source is Terex Terex Aerial Work Platforms, which last year introduced the ShorePlug connector.

“The ShorePlug connector allows multiple light towers to be connected in-line and operate from a single power source. Customers quickly see that this saves money on fuel while enjoying the benefits of LED quality light,” Ms Engstrom explained.

The Ecolite H2 can be used in locations that would normally be restricted, and can run without diesel making it ideal for environmentally sensitive areas where a risk of contamination may occur. The Hymera fuel cell produces energy by combining hydrogen with oxygen from the air to form electricity and water.

There are no carbon or particulate emissions, and as a result the process is virtually silent, which is important for work at night or in built-up areas.

The Ecolite H2 is currently on trial with Arcola Energy at Dunsfold Park, a former World War II Canadian Airforce Base in Surrey, UK.

The unit has been deployed as part of a Technology Strategy Board funded project known as ‘Green H2’ to demonstrate practical whole system applications of fuel cells and hydrogen.

Other manufacturers are also exploring alternatives – Morris Site Machinery, for example, launched its solar-powered tower two years ago.
But Jonathan Garnham, director and general manager of JCB Power Products, said the manufacturer was weighing up the commercial viability of this kind of technology.

“We are watching the new technologies quite closely but are yet to invest in the development of such systems for lighting towers,” Mr Garnham said.

“Our research suggests that some commercial challenges remain, but we will continue to monitor the developments in these areas to the point where we can offer the rental customers a value added solution.”

Mr Garnham added, “The metal halide tower still makes up the majority of our business. It is well established in the market, has a lower acquisition cost and a higher output. We are seeing a growing interest in our LED product and I believe the market is becoming increasing aware of the advantages.

“The key benefits we see are lower running costs and longer run times on a single tank of fuel. Furthermore the light from the LED Tower is preferred by some customers, and the instant light is popular with sectors such as events. The LED has a 30000 hour lifetime and rental customers appreciate the reduction in downtime and call outs as well as the cost saving associated without having to worry about broken bulbs.”

However, the alternative revolution isn’t completely eclipsing traditional lighting tower technology, and many manufacturers continue to bring new halide lamp towers to the market as well.

Chicago Pneumatic has launched two new lighting towers – the CPLT M12 for international markets, and CPLT H5 targeted at Europe. The CPLT M12 boasts four 1000 W metal halide lamps, and manual mast and a robust fuel filter to allow it to cope in regions where poor diesel quality is a concern.

In contrast, the CPLT H5 features more electronic bells and whistles, including an hydraulic mast that can hydraulically rotate 340o, a digital control panel designed for lamp sequencing, lamp failure detection technology and a weekly timer that can schedule up to eight lighting events.

Atlas Copco has also made a new addition to its halide range in the form of the QLT H50, which uses four 1000 W metal halide lamps and is built to be robust and easy to transport. It also boasts an integrated control panel built into the canopy.