Surviving as a rental business in today's economy 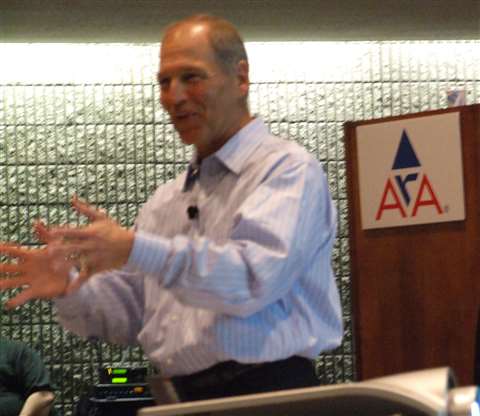 Dr. Robert Genetski presented "Today's Economy: Understanding the Outlook for the Rental Industry" at Construction U on March 1.

The economy was a hot topic at this year's Construction U event held Sunday, March 1 as a part of The Rental Show, March 2-5, in Atlanta, GA. Topping the agenda was the informative, highly attended, "Today's Economy: Understanding the Outlook for the Rental Industry," presented by Dr. Robert Genetski.

Genetski, the former chief economist for Harris Bank, argued that the US government and Federal Reserve steered the country into "the most-serious economic downturn since the Great Depression" and explained how to use 'classic economic principles' as a business to get back on top.

"Our government is broke," he said about the US. "So where do we get the money for bailouts and stimulus packages? Credit."

Genetski said the housing and construction markets, as well as financial markets, will breathe the economy back into life. "I believe we are less than six months away from getting rid of the housing excess, but, that would be in a perfect economy," which we aren't, Genetski said.

Stating that housing prices have fallen by 26 percent since the collapse, Genetski expects prices to fall even further, by as much more as 10 percent. "It has not been this low since the Great Depression."

But while some markets have completely stalled, Genetski said the construction market is still somewhat plugging away due to the typical two to three year lag within the industry. "The problem with non-residential construction is that they need credit and it's not being given out," he said. "A bright spot could be government spending with construction in the bridges and infrastructure sectors."

In order to stay on top as a rental business, Genetski said, be a survivor. Avoid fixed-price contracts, anticipate further challenges, reduce your company's reliance on debt and borrow at fixed interest rates. "If you have to rely on debt, go on a fixed rate," he said.

Lastly, Genetski said, as banks start to put "floors" on rates, negotiate a "ceiling" as well.

"We have a $14 trillion economy," he said. "We can have a Great Depression-type economy, but there will still be activity. Your objective as a company is to get to that activity."

ALL purchases 18-unit RT package
The ALL Family of Companies is expanding its fleet of RT cranes with a package from Grove.