The cranes are Gottwald Model 8s and will be used for handling bulk in open-sea operation off the coast of Guinea, Africa, from the end of 2019.

This is the first time Cosco has bought a floating crane from Konecranes. According to Konecranes, the Model 8 is built for use on the open sea and are designed in accordance with Lloyd’s Register Code for Lifting Appliances in a Marine Environment. This allows them to be operated at wind speeds up to 24 m/s and maximum wave heights of 2.5 m. Both cranes have a maximum outreach of 43 m and a 63 tonne grab curve for continuous-duty bulk handling.

Specifically, they will be used for transhipping bauxite, used for the production of aluminium, from river barges onto ocean-going Panamax vessels on the open sea. ZhiJun Fan, general manager of technical division of Cosco, explained further, “We will operate the two floating cranes within the framework of our cooperation with the China Aluminum group, an important step in the implementation of China’s One Belt, One Road initiative. The aim is to transport bauxite from Guinea to the aluminium plants in China. As transhipping raw materials at sea quickly and safely plays a key role in the supply chain, we opted for Konecranes Gottwald Floating Cranes. These cranes have proved themselves in Africa and beyond as particularly productive and reliable in rough open sea environments.”

According to Konecranes, with these two cranes, the number of Konecranes Gottwald floating cranes in operation on the western coast of Africa totals ten. 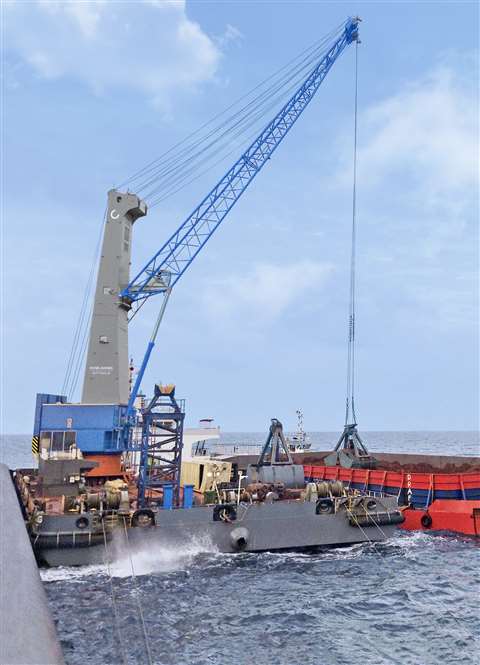