Transport project: Manoeuvres to the mill 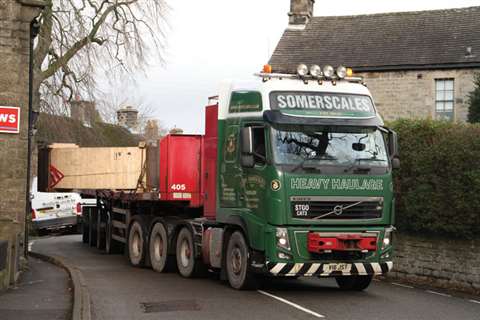 The 56 tonne tyre was 6.25 metres in diameter and was a tight squeeze through small villages

Somerscales Heavy Haulage negotiated the quirks of minor roads and small villages to deliver some large cement plant components to a remote site in the UK. David Weston reports

The Hope valley is a large wide one that runs East to West in the heart of the Derbyshire Peak district, an area of north central England long popular with walkers. It is also home to the largest cement production plant in the United Kingdom. This site has been subject of a £14 million (US$21 million) investment programme to boost production.

Hope Construction Materials, a leading supplier of cement, aggregates and concrete in the UK, produces 1.5 million tonnes of cement a year. With an 85 year history Hope cement works contributes to the supply of around 15 % of the UK’s demand. It is an important local employer with 200 staff.

Mittal investments created Hope Construction Materials from the parts of Lafarge and Tarmac that the competition authorities required them to sell off before they could merge. Hope is now two years old but the site dates back to 1929 when Blue Circle Cement opened its first plant on a green field site. By 2009 it had produced an estimated 61 million tonnes of clinker. The site was operated by Lafarge following its takeover of Blue Circle in 2001. The site has been operated by Hope since January 2013.

A pair of major components for the upgrading works were delivered to Hope by specialist contractor Somerscales Heavy Haulage at the end of 2014. Having entered the country though Immingham docks there followed extensive planning to get the two components to site. This pair of components consisted of a 49 tonne 6.30 metre long, 5.30 m wide kiln section and a 56 tonne tyre that was 1.10 m by 6.25 m.

The tyre had been loaded onto a Broshuis four axle flat trailer pulled by a Somerscales Volvo 8x4 tractor unit driven by Gary Walker. The kiln section was transported using one of the new DAF XF 6x4s coupled to a Scheuerle modular trailer fitted with a vessel deck to keep the overall load height down. Michael Wise was the driver.

The two very different components where to travel by separate routes though the county of Lincolnshire. The kiln section was too high to travel along the motorway, which was the way that the tyre went due to its width. The components had a rendezvous point just outside Sheffield where they also met up with South Yorkshire Police who would escort them though the City and on to the county boundary where they would hand over escorting duty to Derbyshire Police.

With the two loads now together they made their way through Sheffield city centre at a steady pace under the watchful eye of the police escort. Progress was very good until they left the city ring road and headed west along the A57 road. It was not long before the convoy started to encounter obstacles along the narrow roads to the west of Sheffield. They would not have been a problem to vehicles of normal width but the width of the tyre meant that progress at times though some of the narrow streets was quite slow.

To aid the passage of the loads toward their final destination the crew went looking for the owners of several parked cars as their chosen parking positions blocked the convoy. Fortunately for Walker the tyre was loaded on the top of a flat trailer so it made it high enough to pass over the top of most of the bollards and fencing and other street furniture encountered along the route to the cement works. The tyre was also high enough above the road surface to pass over the top of several cars that had been parked without consideration for the passage of the load.

Having left Sheffield behind the convoy reached the turning off the A57 at the Ladybower reservoir. From here they started to head south though the village of Bamford where some of the tightest spots where encountered along the route.

Properties along the route through Bamford had been notified using cards the weekend before by Somerscales Transport manager Alan Cross advising local residents of the forthcoming abnormal loads but sadly not everyone paid attention.

After negotiating the village the convoy turned right onto the A6187 and headed into the village of Hope and the end of the journey was in sight. In the village they turned down another narrow lane to head away up to site. This lane also presented its own problems, namely a narrow hump-back bridge with a sharp turn just before it.

Having managed to negotiate that final hurdle the loads then arrived at their destination. With the moves completed Alan said that the move had gone very well and said that it was in no small part due to the able assistance from both South Yorkshire Police and Derbyshire Police.