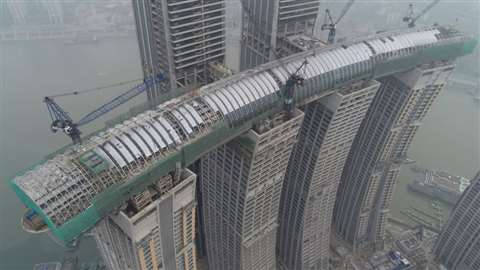 The Crystal, the world’s higest skybridge. Image courtesy of CapitaLand

The eighth and final skyscraper of the US$3.8 billion Raffles City Chongqing megaproject has been completed by developer CapitaLand.

This follows the structural completion of the development’s 250m high skybridge, The Crystal, which is said to be the world’s highest skybridge. It links six of Raffles City Chongqing’s eight skyscrapers.

The 1.1 million m² project, which has been under construction for six years, is due to open for business later this year.

Chongqing, in the southwest of China, was described in a report by the Economist Intelligence Unit as one of China’s 13 emerging megalopolises. It is estimated that over 30 million people live in Chongqing.