Utilities: A deep dive into tech 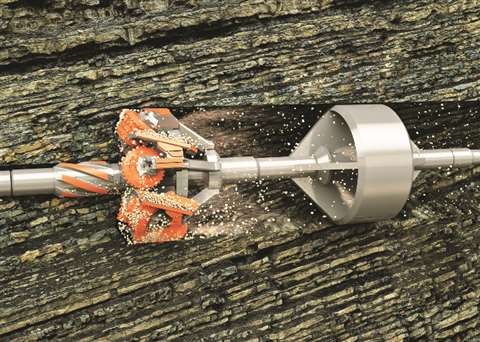 With this in mind, we can expect to see the job of installing utilities rising in prominence for developers and contractors.

Even with the slowdown in world economic growth, the utilities sector is maintaining healthy figures, with the horizontal direct drilling (HDD) market alone expected to be worth around half a billion euros a year by 2023.

According to Ed Savage, product manager at Vermeer Corporation, there has been a significant shift toward horizontal directional drilling in the utility industry, although, he adds, there are still many instances where open-cut methods, including trenching and micro-trenching, are a more cost-effective and efficient method.

He said, “For many contractors, the installation method they utilise is driven by the equipment in their fleet. While specialising is good for contractors, adding additional installation services can help grow their business.”

Tod Michael, a product manager for trenchless products at Vermeer, agrees, but says there is often more than basic economics to be considered when choosing between trenchless technologies and open-cut methods of installation.

He said factors that should be considered include “ground conditions, the diameter of the product, grade requirements, underground and above-ground obstacles, as well as location.”

In countries with more developed infrastructure, he says, HDD is usually the preferred installation, especially for smaller-diameter utilities, as this method minimises restoration and disruption for traffic and local residents and workers.

Beyond the urban sprawl, trenchless methods may still be more cost-effective or efficient. For example, for deeper installations or those taking place in rocky conditions, HDD could still be the best choice, as less material needs to be removed during the process.

In urban environments, the installation of utilities – be they water pipes, sewers, power cables or fibre optics for tomorrow’s technology requirements – needs to be quieter and less pollutive than ever, especially in the heart of historic European cities.

The new Vermeer D23x30DR S3 Navigator is a horizontal direct drill integrating dual rod technology into a compact machine designed for use in urban areas and tight jobsites.

The company says the rig has a class-leading narrow footprint, while, at 7,484kg, it is the lightest rock drill on the market.

The rig operates with a Vermeer Firestick drill rod system, which gives operators 7% downhole steerability. The threaded outer rod has a rotational torque of 4,067Nm, while the inner rod delivers up to 1,085Nm.

Powered by a 3.6 litre Deutz diesel engine, the new rig also boasts new rock tooling, with a drill head that can be fitted with a 140mm tricone bit or a polycrystalline diamond compact bit.

Tod Michael says, “For utility installation work in rocky soil conditions, HDD contractors traditionally had to choose between using a larger horizontal directional drill, bringing in more equipment so they could use an air hammer or go slowly and potentially sacrifice productivity.”

He says the new rig is ideal for small-diameter installation bores in rocky ground, as it “helps reduce risk of damaging sidewalks or turf while manoeuvring the drill into position.”

Ditch Witch has continued to develop its own HDD rigs, with the recent launch of the J24; another compact machine, designed very much with urban and residential jobsites in mind.

The rig has a wider frame than others in its class, which Ditch Witch says gives it best-in-class stability, without the need to sacrifice manoeuvrability, allowing it to traverse uneven terrain and city kerbs. The machine’s maximum carriage speed of 1.1 metres per second, could enhance productivity through reduced cycle times.

With a 75kW Stage V-compliant Cummins diesel engine, the JT24 has a new hydraulic platform to maximise drilling efficiency and conserve power, and the rig is able to carry up to 122m of drill pipe onboard. 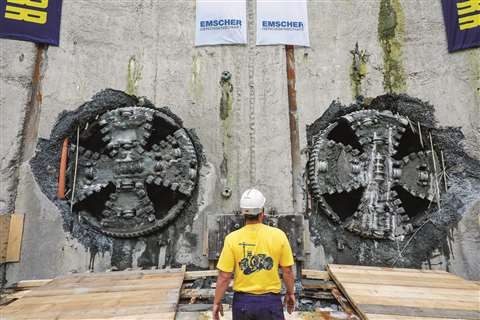 “The JT24 was designed based on direct customer feedback, manufactured to effectively manoeuvre and traverse urban terrains where much of the utility and rehabilitation work is happening today.”

While the material ejected by trenchless operations may be considerably less than that generated by open-cut installation methods, there is nonetheless the need to shift dirt and the demand for compact excavators is as great as ever on utilities projects.

Underground construction specialist Herrenknecht recently introduced three downhole tools for the HDD sector. The company says the patented developments can be used separately or in combination, allowing boreholes to be reamed and cleaned in one pass, while preventing drilling fluid leaks.

Herrenknecht says the eccentric screw shape of its weeper subs can significantly improve material flow when drilling pilot holes, with a nozzle removing part of the drilling fluid from the drill string, facilitating the removal of sedimented drillings.

The company’s full-face hole opener can be equipped with different cutter types, depending on ground conditions, and promises to ream pilot holes to the required diameter in a single pass.

A downhole jet pump is another product from Herrenknecht; it has three laterally placed vanes with an integrated grid. The equipment promises to pump even larger drillings into the drill string and away, without the need for special additives.

Underground construction processes and equipment are clearly becoming more complex, yet, according to guidance systems specialist Subsite Electronics, the tracking process on HDD bores has remained relatively unchanged since the introduction of horizontal directional drilling itself.

The US-based company has produced a range of new products to improve the efficiency and productivity of underground jobsites, including the TK Recon HDD guidance system, a future-proofed handheld device with an industry-leading depth range of up to 33.5m and the latest radio performance, including increased interference immunity and faster information transfer than previous models.

The Recon, which offers numerous battery choices, has two locating methods, allowing operators to use a preferred method of locating, then use a second method to verify results.

For locating utilities, Subsite has developed the 830R/T, a high-frequency device that can trace poor conductors, such as ungrounded tracer wire, as well as locating short lengths of utility infrastructure.

As well as an extended battery life, the 830R/T boasts adaptive filtering, making it more responsive in all modes of operation, and providing left-to-right guidance very quickly, regardless of mode or operator style.

While high-tech solutions can clearly be effective, sometimes more basic technology can be both cost-effective and extremely efficient.

UK-based Centriforce, a leader in plastics processing and reprocessing, developed Stokbord Cover, heavy-duty protection for a variety of buried utilities.

Whereas, in the past, Stokbord was laid over utilities in 1m sheets, it is now available on a reel, allowing it to quickly cover a large area of pipework or cables.

Jonathan Pearce, Head of Sales at Centriforce, said, “Working collaboratively with our customers, we recognised that the amount of time spent in the trench was a rising concern. 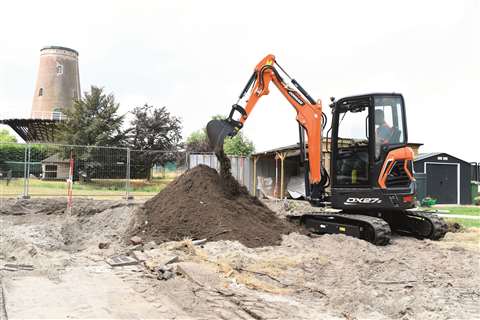 Doosan’s zero tail swing 2.7 tonne DX27z gets down to some trenching work

“As a result, the new Stokbord Drum system has been created to deliver a mechanical rather than manual installation, keeping operatives safer and at the same time significantly speeding up the process.”

Excavators are ubiquitous on construction sites and utility projects are no different. Earth must be moved and there is no machine that does it better.

Doosan Construction Equipment has extended its range with the launch of new Stage V-compliant models that could have differing advantages for utilities contractors.

According to Doosan, the zero tail swing 2.7 tonne DX27z combines stability with high digging forces, yet maintains low weight for ease of transportation.

The excavator maintains its zero tail swing capacity, even with an optional heavy counterweight, yet has, says Doosan, the largest cab in its class. It also boasts an optional long arm and can be delivered with a premium cab.

This larger excavator is powered by a Yanmar 4TNV98C common rail direct injection diesel engine, providing 44.3kW of power at a rated speed of 2,100rpm. 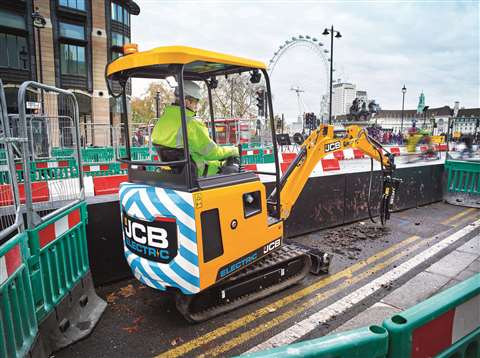 The backhoe loader may not be the powerhouse on construction sites that it once was, but its adaptability and tool carrying prowess make it a favourite for many utilities specialists.

JCB recently introduced two variants to its 3CX compact loader – the Compact PLUS and the Compact PRO – both standing at just 2.74m high and 1.9m wide.

New features include front auxiliary constant flow (at 70 litres per minute on the PLUS and 120 litres per minute on the PRO), varispeed transmission, to enable travel speed to be set independently of hydraulic flow, a front skid steer quick hitch, auto two- or four-wheel steer alignment and an optional rear excavator powerslide, enabling the rear excavator to hydraulically side shift, reducing the need to reposition without causing ground damage – extremely important on inner city sites.

The excavator uses three or four lithium-ion battery packs, with a total storage capacity of 15-20kWh.

JCB says the sophisticated battery management system on the 19C-1E, gives it full-shift availability. An on-board charger with a 110V input allows the machine to be charged in 12 hours, while the 230V option can charge it in eight hours. A fast-charge option is being developed that the company says will bring full charging down to just two hours.

The new excavator is undoubtedly a trailblazer within the construction industry, and contractors working on urban and inner city utilities projects are likely to be early adopters of electric machines and other intriguing and forward-looking technology.