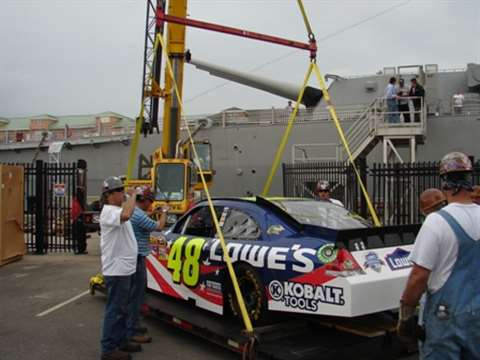 The Grove TMS 760e 60-ton hydraulic truck crane was rigged with 100 feet of boom at a radius of 45 feet. The cars were placed on the deck of the USS Wisconsin for a NASCAR commercial.

W.O. Grubb has become a go-to crane and transport company when it comes to show business. The company's cranes were featured in the movie "Evan Almighty," and their crews erected an elaborate stage for a U2 concert in Virginia. Recently W.O. Grubb Crane Rental played a huge role in rigging and lifting race cars for a television commercial.

The job involved rigging and lifting three very famous NASCAR cars - those of Dale Earnhardt, Jr., Jimmy Johnson and Jeff Gordon - onto the deck of the USS Wisconsin battleship, which is harbored at the Nauticus National Maritime Center in Norfolk, VA.

"They were shooting a commercial called 'Summer Salute' sponsored by Pepsi and Lowes," says Larry Becker, branch manager of the W.O. Grubb branch in Portsmouth, Virginia. "The challenge is to raise $1 million for the USO."

To say the least, the race cars had to be handled with "kid gloves."

Grubb used its Grove TMS 760E 60-ton hydraulic truck crane. The crane, which was stationed on the dock adjacent to the ship deck, was rigged with 100 feet of boom and its full counterweights. The lifts were made at a 45-foot radius. The cars weighed approximately 4,000 pounds each, Becker says.

The cars were lifted carefully and slowly, one at a time, using a spreader bar and straps attached to the bottom of a trailer that had been cut to the size of the wheel base of the cars. The trailer base had ramps attached so the cars could be rolled on and off.

"Our welders welded additional supports and loops for connecting the straps," Becker says. "We added some extra safety precautions to the unit and made sure it met our and NASCAR's high safety standards."

Before the day of the lifts, Grubb's crews performed a test lift at their yard, Becker says. "Our test lift was the approximate weight of the cars," he says. "We added additional weight to account for any wind and movement of the cars."

On the day of the job, each car was lifted onto the deck and then positioned for the shooting of the commercial. The job was performed quickly and efficiently with no issues, other than cloudy skies.

The famous cars were quite revered by the W.O. Grubb crew, many who are racing fans. The crew posed for photos in front of one of the cars after the work was completed.

Once the commercial was filmed, Grubb crews returned and lifted the cars down in the same manner they were lifted up, slowly and carefully to as to assure not even a fingerprint smudged the famous automobiles.