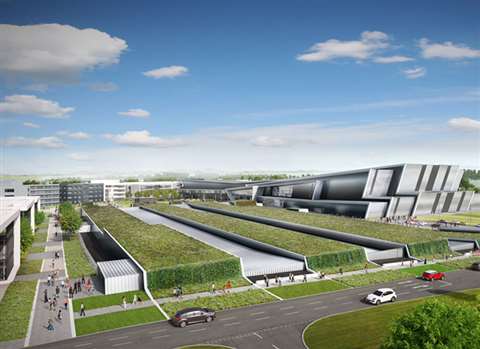 A £333 million (€453.23 million) exhibition and conference centre is being planned for Aberdeen, Scotland, and it is due to be completed in time for an Offshore Europe Conference in 2019.

Aberdeen City Council’s planning authority approved the New Aberdeen Exhibition & Conference Centre (AECC) in October, and it is said that it will form the focal point of a major new masterplan for Aberdeen.

Global consultancy Turner & Townsend will project manage the first phase of projects. The 105,000m2 complex will include a 9,000m2, 12,500-capacity arena, which has the flexibility to double up as an exhibition hall.

The AECC will include an adjoining four-star hotel, with a further two hotels located adjacent to the main building, which will be developed within the first phase. The masterplan for the site allows for future development of up to 60,000m2 of offices and 6,000m2 of leisure.

The new facility will be served by an energy centre and anaerobic digestion plant.

The AECC will be located off the A96 adjacent to Aberdeen International Airport.

Turner & Townsend will be working for specialist property developer Henry Boot Developments, which is partnering with Aberdeen City Council on the scheme.

Andy Outram, director for Turner & Townsend, said, “Over the next three years, our role will be to overcome numerous challenges, including construction so close to the airport, diverting large scale utilities and repositioning three existing watercourses to create a new park.”