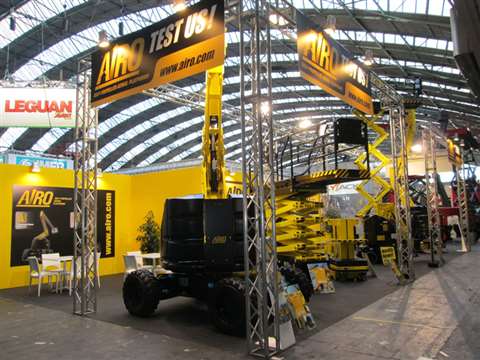 The Airo Tigieffe stand at APEX 2014

Despite the difficult economy in Italy, Airo is reporting new ventures in the country, including the expansion of one of its dealers.

Top Car, a distributor for the Italian manufacturer, has opened a new rental depot in the country.

The facility is based in Casnate con Bernate, a few kilometres from Como and adds to Top Car's headquarters in Lecco. It will offer forklifts, batteries and aerial platforms, including articulated, truck mounted and scissors.

"The difficult time for the Italian economy does not seem to stop, but not all businesses are being discouraged. Airo stands alongside those who want to take a challenge and bet seriously on the rental, an activity which, if well organized, has many good reasons to establish itself in these economic times."

In addition, three rental companies in the Piedmont region of Italy have joined forces to open a new rental organisation, with the first machine purchased being an Airo A12 JE boom.