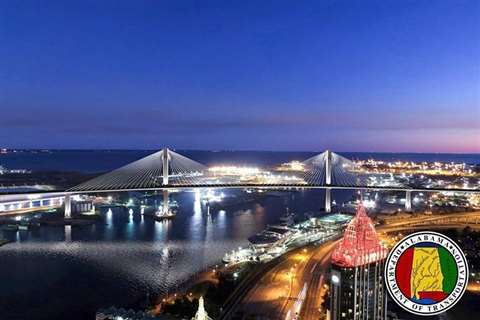 Artist’s impression of the I-10 Bridge in Alabama

A new bridge is being planned for construction in the US state of Alabama. The Interstate 10 bridge is part of a scheme to alleviate pressures on the existing local transport infrastructure.

When constructed the structure will cross the Mobile River and Mobile Bay and would be one of the largest in the US, spanning around 16.1km.

The project is expected to cost around US$2 billion, but the state cannot afford to finance the project exclusively from its own funds. A public-private partnership is being sought by authorities in which a private firm will operate and maintain the bridge while the Alabama Department of Transport (ALDOT) oversees it.

John Cooper, Alabama’s transportation director, said that private companies are being brought in to help, “The plain truth is, we don’t have the financial capability to build this project without some assistance.

Opposition has been seen from locals to the state’s plans to charge tolls of as much as US$6 each way to finance construction of the multi-billion-dollar bridge.

Thousands of people cross the bay each day to commute to or from Mobile, and tolls would range from US$3 to US$6 based on the distance travelled. Critics say the charges would add more than US$1,000 to their annual budgets.

The existing road averages 75,000 vehicles daily and passes through the Wallace tunnel. Once construction of the bridge is complete, the tunnel will also become a toll point – charging drivers for passing through.

According to ALDOT, motorists who use the Bayway 20 or more times in a month will get a 15% discount.

A Facebook group opposing the new toll plans has around 30,000 members.