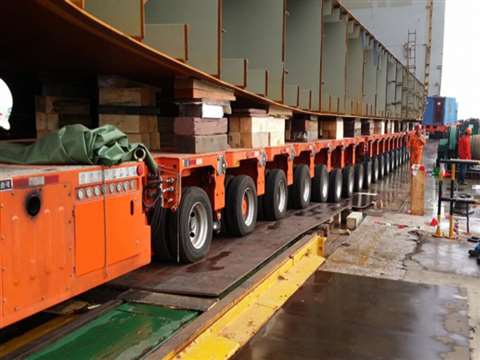 Anster, an established provider of heavy lift transport equipment in China, is looking for a what it describes as ‘bidding partners’ and distributors to help it expand its business globally and improve communication with customers around the world. Although the company’s main market remains China, it said it has experienced rapid growth in global markets, distributing its products to 46 different countries - a trend it is keen to push. To date, the leading countries for its exports include South Africa, the Philippines, South Korea, and the UAE, the company stated.

Anster claimed it is particularly experienced in the transportation of ships and their parts, citing a recent job in South Asia where it lifted ships weighing up to 2000 tons using its line of SPMTs. Anster said its SPMTs are fully compatible with those from Goldhofer and Scheuerle. Anster also manufacturers heavy haulers and truck trailers. Its range of semi-trailers includes flatbed, chassis and lowboy models.

Anster said it believes it will continue to lead the market for heavy transporters in China due to its competitive pricing strategy and the amount of money it has invested in technology and quality control. It claimed that its SPMTs offer ship builders an alternative to using gantry cranes thanks to the precise control they offer; it said its SPMTs can move heavy ship segments that need to be joined together with a precision of less than 2mm, which it claimed is the best possible accuracy on the market.

If you are interested in becoming a bidding partner / distributor, please email the company at: info@anstertrailer.com.