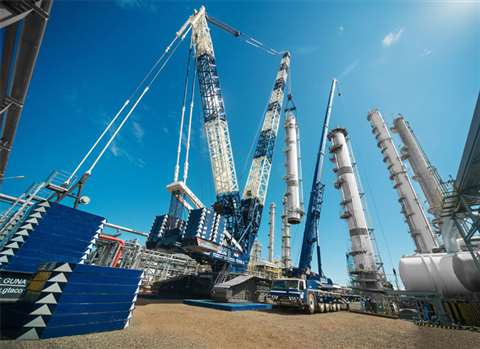 GTA construction has bought the first 1,350 tonne Liebherr LR 11350 crawler crane in Indonesia. It has so far seen work on a fertiliser plant in Palembang and petrochemical scheme in Anyer.

Taken as a whole, the Asia-Pacific region is one of the largest construction markets in the world, and certainly the fastest growing. Major economies like China, Japan and South Korea have a strong influence, but there are many other markets which present opportunities. Countries like Indonesia, Malaysia, Singapore, Taiwan, Thailand or Vietnam may be small in comparison, but they are still significant markets which offer some impressive growth.

The economic slowdown of the last year or two has had an impact in the region, particularly in countries which rely on commodity exports to drive their growth. Some governments have reacted with stimulus measures, which tend to favour construction activity, but with money tight and public finances stretched, the public private partnership (PPP) model is increasingly being explored.

For example, Indonesian president Jokowi Widodo, who took office in October, has put an emphasis on infrastructure investment. He previously served as governor of the capital city Jakarta, and inaugurated the Mass Rapid Transit (MRT) scheme during his time in office, as well as approving the Jakarta monorail project.

As national President, he is now pushing for some IDR 4,900 trillion (US$ 370 billion) in infrastructure investment over the next five years. Many of the projects identified as strategically important involve connecting up the Indonesian archipelago with road and rail links.

However, there are also airport, dam and coastal protection schemes vying for money. In addition, about 30% of the proposed funds are to be targeted towards basic infrastructure, such as sewerage and water.

But like so many governments, Indonesia does not have the money to pay for this itself, and is looking for private investors to bridge the gap through PPPs.

One of the most ambitious projects is the National Capital Integrated Coastal Development (NCICD) master plan, which is better known as the Giant Sea Wall. This US$ 40 billion scheme is designed to protect the capital from flooding from the sea by building a series of lagoons in Jakarta Bay to act as buffers against high flows.

The land reclaimed to form these lagoons will create 17 artificial islands, which the government says could be home to 2 million people. But in terms of construction, the key element will be the main sea wall, which could be some 32 km long between Tangerang and Tanjung Priok harbour.

But the Indonesian government has been clear that the scheme will not go ahead without private investment, and even if this is achieved, the construction period is likely to be 10 to 15 years.
PPP Handbook

The desire to leverage private capital and develop more PPP projects across Asia prompted the Asian Development Bank (ADB) to publish a PPP Handbook in 2012. This provides an overview of the role, design, structure, and execution of PPP projects for its staff and member governments. The handbook was followed last year by the opening of the ADB’s PPP advisory office.

"Using PPP business models is one of the best ways for developing Asia to meet its massive infrastructure investment needs, estimated at US$ 8 trillion up to 2020, given the significant amount of private capital that is waiting to be deployed to well-structured and bankable deals,” said Ryuichi Kaga, head of the new office. “Accessing the operational expertise of private companies is another advantage of PPPs for implementing infrastructure projects efficiently.”

Indeed, in its ‘Strategy 2020’ document, the ADB has committed to having private sector operations and development account for 50% of its activities by the end of this decade.

There have been some interesting developments since the launch of the new ADB department. Perhaps most significant was the January announcement of a large scale PPP scheme by the Philippines government to expand and renovate Mactan Cebu Airport. Funding for this includes a US$ 75 million loan from the ADB as well as some PHP 20 billion (US$ 450 million) in debt from a consortium of Philippine banks.

According to the ADB, Cebu is among the fastest growing regions in the Philippines and a major contributor to the country’s economy. It is the gateway to the Visayas islands but the existing airport at Mactan can no longer cope with the surge in passenger numbers. Mactan Cebu Airport, which opened in the 1960s, was designed to serve up to 4.5 million passengers a year but in 2014 it was used by more than 7 million.

The project – which aims to deliver high-quality airport terminal operations in line with international standards – will include the construction of a new passenger terminal and renovation of the existing one, as well as providing new commercial facilities.

Passenger capacities at the new terminal and upgraded one will reach 12.5 million each year, and the project will be developed under a 25-year concession agreement for the operation of both terminals and commercial outlets.

Another interesting development in the region has been the Chinese government’s move into the development loan arena, with the launch of its Asian Infrastructure Investment Bank (AIIB). This has a political dimension, as it is seen as a Chinese alternative to the current lending institutions, which are dominated by Japan (the ADB) and the US (World Bank).

As of April this year, most Asian countries and developed economies outside the region had joined the AIIB as its 57 founding members, with the exception of the US, Canada and Japan. Despite these absences and the refusal to let North Korea and Taiwan join as founding members, the AIIB is expected to be operational by the end of this year.

There is little information available at this stage about what types of project the bank will seek to fund, and on what kind of scale, although its name points clearly to the infrastructure sector, which should benefit construction companies.

And although there is a clear geopolitical angle to the formation of AIIB, the fact remains that there is an enormous need for infrastructure investment in Asia, and this could be another institution to help deliver that.