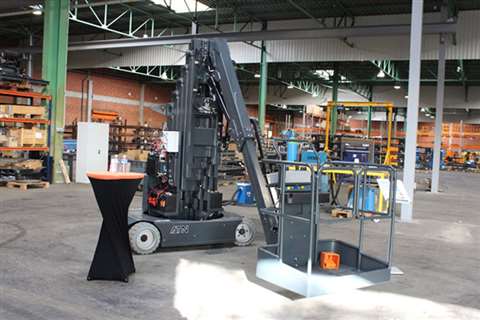 The Piaf 1200R mast lift will be launched at Bauma.

France-based ATN is set to launch a 12 m mast lift at Bauma in 2016. The company said it would also introduce a new crawler-mounted mast in the second half of 2016.

The annoucement came at the manufacturer’s annual October Days customer event at its headquarters in Fauillet, where it also presented new versions of its 12 m and 16 m booms.

The new electric Piaf 1200R mast lift will have a 12 m working height and a horizontal range of more than 5 m, as well as zero turning radius and gradeability of 30%. It will also offer the manufacturer’s diagnostic screen.

The company said it will also introduce a new crawler mounted mast in the second half of 2016. It follows in the footsteps of its predecessor the PIAF 810. The 1010 model has has working height of more than 10 m and a horizontal reach of almost 3.5m.

There have also been upgrades to ATN’s existing Zebra 12 and Zebra 16 booms, shown at the customer event.

The Zebra 16 is an articulated diesel platform with 16 m working height, plus it has 4 wheel drive and brakes. The new 4x4x4 version offers a shorter turning radius allowing greater maneuverability and crab function. It has the same 9.3m horizontal reach and a diagnostic screen.

The new Zebra12 V2 will replace the Zebra 12 and introduces several changes. It will be equipped with an oscillating axle and greater accessibility to the engine. The new model allows up to four simultaneous movements and raises the boom in half the time of the previous version.

"Being surrounded by customers is the best way to celebrate 15 years of ATN," said Daniel Duclos, founder of ATN. "We work to be a leader in the AWP sector but we can only reach this aim if you trust us. We do what we say and we say what we do.”