The condominium of the Southwest clinical centre, located in the Sudoeste neighbourhood in Brasilia, undertook important work in its premises. Between March and April 2017 it removed all polycarbonate and support beams from the central patio that were already more than 13 years old and installed a tensioned canvas structure. More than 7 t of metal were removed and shipped for recycling.

The Earl’s Court project in London was an extremely large and complex project located in a highly residential area, requiring the demolition of structures comparable in scale to that of a conventional power station.

High waste reuse and recycling rates have been achieved, with 99.3% of waste diversion from landfill and 111,894 t of crushed concrete reused on site of production. This prevented removal of material as waste as well as future requirements to import material for future works, saving 6,200 HGV movements and 149 tonnes of CO2e associated carbon emissions. A further 21,600 t of material was reused on other London Keltbray demolition sites.

As a growing demolition contractor servicing the construction industry in New South Wales, Perfect Contracting is aware of its carbon footprint and has set goals to achieve with regards to the environment. Being ISO 14001 accredited has helped it achieve some of these goals and it is undergoing an audit for GreenStar accreditation. 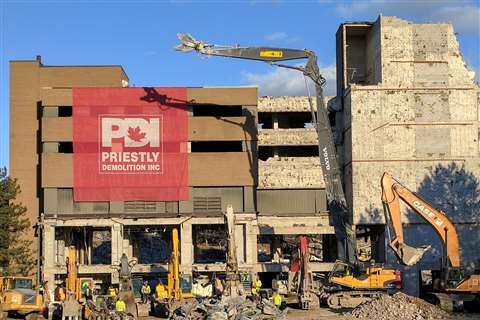 Priestly Demolition is part of a shortlist spanning four continents

Priestly Demolition was contracted by Daniels Humber River Corporation to perform the abatement and demolition of the former Humber River Hospital located at 2175 Keele St in the city of Toronto, Canada. The hospital consisted of the seven-storey east tower, nine-storey west tower, power plant, and service tunnel.