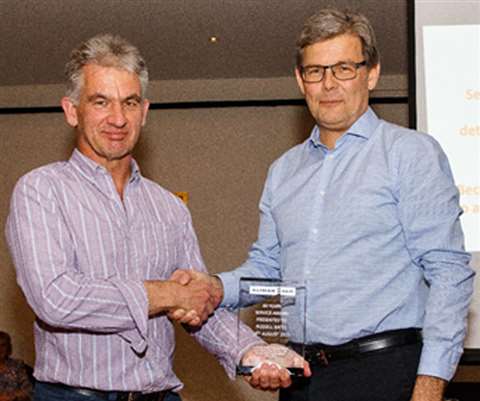 Russell Bates, MD of Alimak Hek UK receiving an award for his 40 years’ at the company from Alimak Hek Group CFO Stefan Rinaldo.

Mr Bates reached the milestone on 18 August. He started with the Alimak Hek Group as a 16-year-old apprentice, moving to the service department after attaining electrical and electronics qualifications.

Sinve then he has held many roles in the organisation, including service engineer, service co-ordinator, parts manager, operations manager, followed by sales manager and UK branch manager, before moving to his current managing director role in 1996.

"He has overseen some of the greatest changes in the company’s history and has not lost any of his drive, enthusiasm and ambitions to grow and improve the company," said the a company spokesperson.