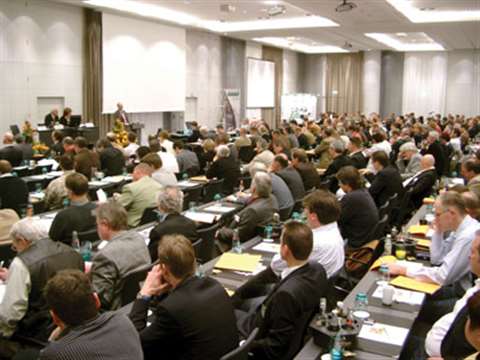 An attentive audience at this year's annual German Demolition Conference

In a busy schedule, 20 technical reports were given, covering some of the most challenging aspects of the demolition industry. The main aim of the event was to improve both the safety and quality of demolition activities.

Unfortunately for English speakers, again this year there was no parallel translation in this language, since no delegates from the UK attended with the exception of your editor. However, D&Ri has been informed that the technical presentations covered a wide area, including EU waste regulations, identification and handling techniques for hazardous materials such as asbestos, and a number of site reports detailing demolition techniques used and challenges overcome

In addition, a mini exhibition was also put together in the anti-rooms of the Hotel Berlin’s conference venue. This attracted 48 exhibitors, including the major European names in the equipment manufacturing side, who displayed their wares to the delegates.

The 15th annual event will be held at the same venue next year on the 20th and 21st March 2009. D&Ri understands that as with this year, 20 presentations will form the core of the event. Parallel translation in English would be made available in the event of there being sufficient demand from English speakers from the UK or elsewhere.