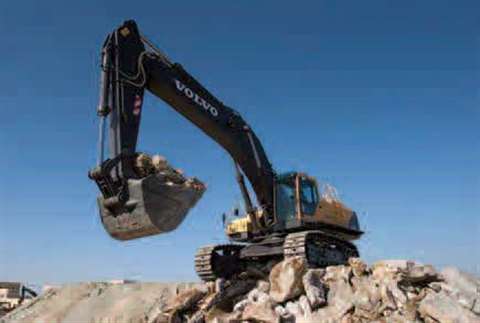 Some companies look towards Asia to cost effectively boost production but Volvo Construction Equipment has its sights set on Europe. The company has just transferred production of its B series tracked excavators for European customers from Korea to its facility in Germany.

Volvo has invested ∈ 7 million in building a new 120 m long tracked excavator production line and new finishing hall at its factory in Konz.

Volvo has invested ∈ 7 million in expanding its factory in Konz, which will allow it to produce its full range of excavators, both wheeled and tracked, in Europe. According to Volvo, this move will not only cut lead times for customers in Europe, it will also free up capacity in Korea cutting lead times for other parts of the world.

The move also creates capacity for commercial production of the first of Volvo's new 70 tonne EC700B tracked excavator which was unveiled at ConExpo in Las Vegas, US in March. Production of the EC700B is scheduled to start this autumn with the first deliveries expected in early 2006.

The new 70 tonne machine – powered by a 374 kW engine and with a 20 tonne lifting capacity – is the largest in Volvo's 31 model excavator line up. “Our smallest tracked excavator – the 1,2 tonne EC13 – almost fits into the bucket of the EC700B,” said Volvo Construction Equipment Europe president Chris Rees.

The company's medium sized 14 tonne EC140B and 21 tonne EC210B excavators are already rolling off the new 120 m long production line in Konz and the EC160B and EC180B are set to follow. The production line could be extended by another 40 m in the future to allow it to be used for manufacturing wheeled excavators.

“We started manufacturing the tracked excavators in Konz at the start of 2005. Currently the production line is only operating one shift per day but production is slowly being ramped up. We are expecting to produce 700 tracked excavators at the site this year but we have the capacity to manufacture up to 4500 units a year through operating additional shifts,” said Volvo product specialist Ingo Richarz.

Transferring production of machines for the European market from Korea may not seem like a logical financial step but the Konz factory has a long history of manufacturing construction equipment and an experienced workforce.

“The facility was owned by German manufacturer Zettlemeyer before Volvo bought out the company, and its factory, in 1990,” said Mr Rees. “The factory's 650 strong workforce has also been building Volvo's wheeled excavators since the company launched its first models in 1998. This experience, combined with our good relations with the workforce, was an important factor in making the decision to move production.” The plant also manufactures Volvo's compact wheeled loaders.

“Moving tracked excavators to Konz will halve the delivery lead time from 12 weeks down to six because of the reduced transport time,” explained Mr Richarz. “We will also be able to more rapidly accommodate special application requirements and the location allows for greater flexibility in the final specification.”

Volvo's investment at Konz will not only benefit the tracked excavator production with a specially built chain driven production line but will also boost the finish of all machines produced at the site. The upgrade included construction of a new finishing hall for carrying out final checking of all the mechanical elements, spraying and pre-delivery inspection.