When building bridges, a lot is demanded from the contractor. Whether it be the perfect consistency of the concrete, structural design for a long service life, or the initial surveying of land, each of these stages has its own difficulties. 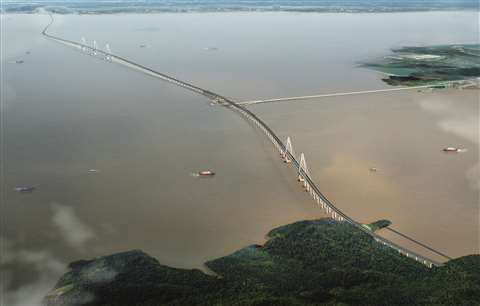 Engineering company Tianjin Tianhe is managing the BIM processes for a network of islands in the Yangtze River Delta, China

Work on what is said to be the world’s longest bridge over water, which will be 36.1km when finished and is located in Kuwait, is almost complete.

The Sheikh Jaber Al-Ahmad Al-Sabah Causeway, which spans Kuwait Bay between Kuwait City and the Subiyah area, is under construction in Shuwaikh Port at a cost of US$2.6 billion.

Featuring 1,200 pillars and foundation piles, 613 steel stacks and over 1,200 pre-cast and cast-in-place concrete beams, the bridge has been constructed out of more than 1 million m3 of high-grade concrete.

Being a sea-bridge, the structure faces the specific challenge of being in direct contact with a salt-laden environment. The project used 1,600 tonnes of duplex stainless steel rebars which had to be specified in the project to offer high strength – and exceptional corrosion resistance – in order to reduce lifecycle costs. 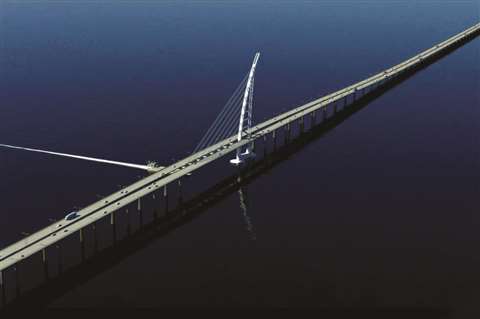 Over 36km long, Kuwait’s Sheikh Jaber Al-Ahmad Al-Sabah Causeway will be the longest bridge in the world when finished

Sticking with the theme of sea bridges, a network of islands in the Yangtze River Delta, south of Shanghai, China, will be connected by the longest sea bridge network in the world.

The four-lane highway begins in Ningbo on the mainland and connects five islands, including Zhoushan, Zhujiajian, and Daishan. This highway will significantly reduce travel time to the islands and connect Daishan to the mainland for the first time.

The total length of the main line of the project is 27.97km and the length of the sea crossing bridge is 17.36km. It consists of two tunnels, five interchanges, and three cable-stayed navigable bridges.

Engineering company Tianjin Tianhe is managing the BIM processes and technology for the construction of one of the bridges in the same network, across the main channel of Ningbo Zhoushan Port, and showed an innovative application of BIM in the construction of a large-scale bridge over deep sea.

By establishing a 3D model, the team was able to find and solve 120 drawing problems and 624 collision points before construction even began. This allowed the project team to avoid many design changes during construction and improve project quality.

In designing this project, Tianjin Tianhe was said to have faced multiple challenges: the scope and complexity of the project, the poor operating environment, and the relatively tight time frame. The site for the bridge has an average sea depth of 30m and weather patterns that are complex and changeable, with tropical cyclones and a relatively large tidal range.

Data from ProjectWise informed each step of the process and the 3D model supported subsequent stages of the project. By identifying errors and optimising the construction plan, Tianjin Tianhe said it reduced costs by 4% to 5.5% and advanced construction progress by 10%. 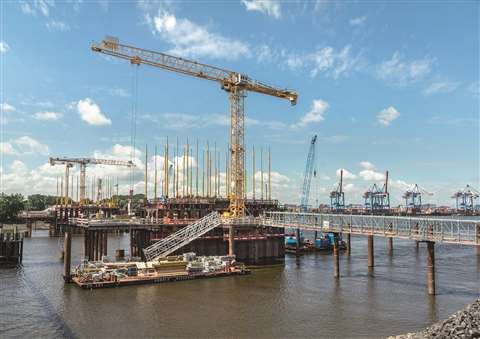 Bridges spanning water sometimes need to have the ability to be raised up. Germany’s largest lifting bridge, known as The Kattwyk Bridge in the Port of Hamburg, is going to have a sister bridge built next to it.

The Kattwyk Bridge is an important hub for industrial transport in the port city. Completed in 1973, the original bridge sees railway and road transport sharing the bridge across the Süderelbe River.

From time to time, the 290m long bridge is closed to land-traffic with the centre lifting section raised to allow ships passage below.

Shared use of the bridge by railway, cars and ships results in seven hours of wait time for road transport each day. In order to separate the use for railway and road transport and ease the burden of heavy goods transport on the old bridge, construction of the New Kattwyk Railway Bridge is currently under way.

The bridge will be built parallel to the existing Kattwyk Bridge and, as the name implies, it will be used exclusively for railway transport. Road traffic will continue crossing on the old Kattwyk Bridge.

Construction of the two bridge piers for this project presents a challenge for concrete engineering. The foreman in charge for the Max Bögl Construction Company said, “We have to work in extremely tight spaces. The piers are built in the water.

Both piers will be approximately 39m high and reach 19m into the substrate of the Elbe River. Each pier is reinforced with more than 1,000 tonnes of steel in case of maximum stress, such as two freight trains, both 750m length and in excess of 6,000 tonnes, being forced to simultaneously make an emergency stop on the bridge.

The new Kattwyk bridge with a drive-through width of 108m will become one of the largest lifting bridges worldwide. The first trains are expected to roll across the New Kattwyk Railway Bridge in 2020.

Concrete technology is one of the key aspects of building in any structure. Max Bögl has been working on utilising self-compacting concretes into its other bridge projects.

With its new segment bridge Bögl, is offering a new structure with a separate load bearing system. The bridge consists of prefabricated composite girders and pre-stressed, precast concrete slabs, which can be driven on directly without sealing and covering.

The company says that this technique offers a short construction time of 100 days or less, cost-effective production as a result of factory fabrication, and quick exchanges of individual segments for low maintenance costs. 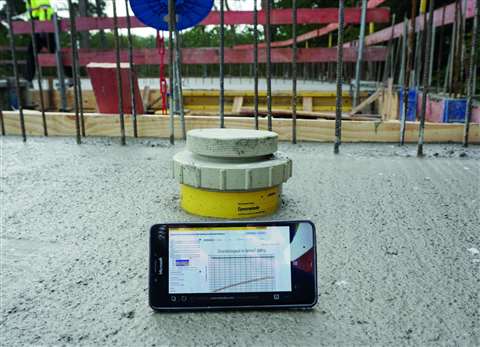 Doka has also been working on implementing its latest concrete technology in bridge construction. The technology, known as Concremote, has been designed to optimise concrete mixtures to increase productivity and quality.

With the aid of mobile communications, the data is transmitted to the Concremote computer centre of Concrefy, a Dutch technology company.

The focus with this technology is primarily to reduce construction time. Doka says that cycle times can be improved by up to 47% and reduce costs by up to 32%. 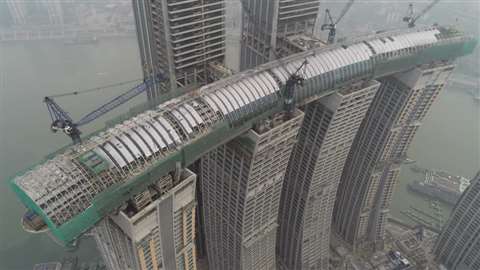 An aerial shot of The Crystal after structural completion

The 1.1 million m² project, has been under construction for six years and is due to open for business later this year.

Although some bridges are built high in the air, it can be necessary to utilise airspace during surveying.

The state of Antioquia in northwest Colombia is a mountainous and densely forested region. Strabag has been contracted to plan, build, finance and operate 176km of motorway winding through this difficult terrain.

The infrastructure to be developed consists of 75km of new road construction, as well as the modernisation of 65km of existing road, a tunnel, plus the reconstruction of over 20 bridges.

The bridges are key to the success of the project, yet technical details were sparse. To map everything (including foundations, pillars, and surrounding terrain), Strabag turned to drones and Pix4D software.

Thomas Gröninger, head of Strabag UAV Division said, “With drones, we were able to fly around the bridges and get a complete overview of the infrastructure: sides, undersides, and terrain. In the end, you have much more data than what you would get with traditional surveying methods, and everything is done faster.” 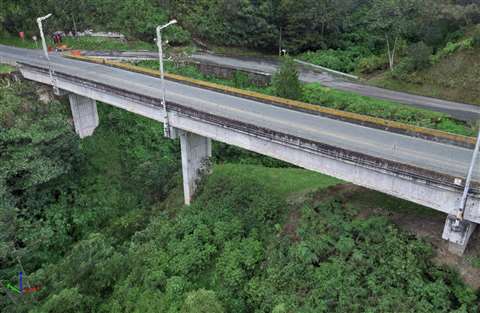 Bridge surveying for renovation in difficult terrain in Colombia

Gröninger explains, “If you take the points with a GPS rover you have to walk in the traffic. It’s dangerous and sometimes not possible. With drones, you can fly around the bridge while traffic is still flowing. That’s why it’s better to fly with a drone and use photogrammetric mapping than traditional surveying methods.”

On top of that, some areas of the bridge are impossible to map with traditional methods. Gröninger continues, “We can only measure where we can walk, which means we only get data on the bridge surfaces. On top of those limitations with traditional surveying methods, the very steep terrain of this Colombian project was also a constraint, being inaccessible for normal surveyors. We had to use a different technology.”

All the images collected were processed with mapping software and generate accurate and highly-detailed 3D models of the existing bridges. The 3D models helped the team visualise in detail the areas of interest and subsequently plan the construction project with precise measurements and volume calculations.

Back in Europe, engineering firm Peri is working on a project-specific solution for the longest cantilever bridge (a bridge which is supported only on one end so it can swing) in Northern Macedonia.

The bridge is part of a new, almost 65km long motorway that will connect the cities of Kičevo and Ohrid.

On the first section, through a particularly mountainous region, the new motorway crosses a total of 14 viaducts. On a particular section around 10km long, 4,000,000m³ of earth had to be excavated with 150,000 tonnes of concrete and 15,000 tonnes of reinforcement subsequently being processed. 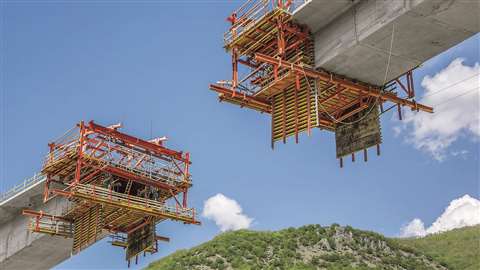 The most challenging part of this project was a viaduct 9km into the road build. To overcome the difficulties Peri used a total of four VBC Balanced Cantilever Carriages from the Variokit Engineering Construction Kit (an in-house design solution), to support the construction of the radial bridge superstructure. The bridge has a span of 165m.

Meanwhile in South Africa, Italian engineering firm Pilosio has devised a custom-made system for another bridge.

The bridge, known as the Cornubia Boulevard Overpass, is a three-box, cast-in-situ concrete deck 127m long and divided into three spans.

One of the complexities of the project is derived from the fact that the construction of the bridge had to take place without interrupting the normal traffic flow of the highway. This led to the construction of large portholes above the highway to allow for the preassembling of formworks panels, installing of the rebars and deck casting operations in a complete safety process.

The deck and the wings of the bridge were poured on a plywood surface installed on a grid of secondary timber beams and main steel walings formwork. The deck of the bridge was installed over supporting truss beams 150cm high and made of HE340A steels and double L-shaped beams, coupled by vertical braces.