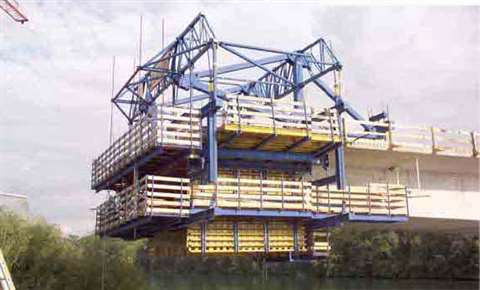 Constructing a motorway bridge across any river is always a complex engineering challenge. But when the river is a busy shipping route, each abutment is in a different country and the bridge has a skewed alignment, the task becomes even more demanding.

This is exactly the challenge which a joint venture of Ed Züblin and Wayss & Freytag is on the verge of completing over the River Rhine between the German and Swiss borders. Construction of the 211 m long bridge between two towns named Rheinfelden - one in Germany and the other in Switzerland - started in October 2003 and is due to finish later this year.

Completion of this € 7,6 million project - jointly funded by the Federal Republics of Germany and Switzerland - will create a fast link between Germany's motorway network and the Swiss road network. The existing border crossing at Weilam-Rhein is accessed via an historic stone arched bridge in the centre of the German Rheinfelden. Opening of the new bridge is expected to help relieve congestion and reduce air pollution in the town centre and improve journey times between Switzerland and Germany.

When completed the new motorway bridge will form a vital part of the extension of Germany's A861 motorway spur, joining Switzerland's N3 highway to the A98 Hochrhein-Autobahn in Germany. Some parts of the A861 carriageway were opened to traffic in 2003 but construction of the new bridge and the 1038 m long Nollinger Mountain Tunnel to the north - due for completion in 2006 - have prevented the full opening of the route.

The 211 m long, three span Rhine Bridge is being built at a skewed angle to the river using the balanced cantilever technique. The bridge features two separate decks which will each carry a two lane carriageway. A 2,5 m wide pedestrian and cycle path is also being constructed on the eastern deck. The overall width of the structure varies from 21,2 m on the German side to 24,2 m on the Swiss side to accommodate an access ramp and approach lane for the customs buildings.

The bridge's span width of 56, 101 and 54 m makes the structure quite small to be constructed using the balanced cantilever approach, but it was essential to maintain the bridge's 7,5 m clearance for shipping throughout the work. Thousands of tonnes of freight are transported along the Rhine each year and obstructing the river during construction was not an option.

Preliminary work on site began in October 2003. The contracting joint venture preassembled sheet pile boxes on a pontoon before they were lifted into position around the locations of the two river piers by a floating crane. Each pier was designed to support both the east and west carriageways. Foundations for the piers were founded into the underlying bedrock from within the cofferdams, clearing the way for work on casting the piers to start in early 2004.

Austrian formwork specialist Doka worked with the contracting joint venture from the award of the contract to develop the formwork systems needed by the site team to construct the piers and abutments.

The piers were not built using the conventional climbing formwork approach but were cast in three sections, with the semi-conical end units cast in the first two stages and followed by the middle unit. “The structural design and geometry of the pier bases meant that the only viable formwork system was our Top 50 large area formwork which is a made to measure modular system,”said Doka adviser Volker Zipfel.

“Top 50's flexibility in terms of shape, size, tie-hole pattern and form facing made it ideal for use on the scheme. On the Rhine Bridge, using Top 50 enabled us to work around the geometry of the horizontal bracing within the sheet pile boxes and the crane standing within each pier, as well as form the semi-conical end sections.”

Doka used three dimensional modeling to design the complex pier base formwork, which included some elements that were up to 13 m high. The sections used to form the semi-conical bases were assembled before delivery to help speed up work on site.

Foundation slabs for the two abutments and piers were all cast in situ using Doka Framax framed formwork.

Work on the eastern pier table started in April last year and was also formed using Top 50 formwork and in June 2004 the joint venture started the balanced cantilevering works on the carriageway. Work on constructing the deck for the western carriageway started soon after Free cantilevering formtravellers, supplied by Austrian structural steel specialist WITO-Konstrucktionen, were used with Top 50 formwork to cast the two decks. Doka's edge beam formwork T was also used to form the edge kerbs on both decks.

“Around 185 m2 of Top 50 formwork was used on each of the two free cantilevering formtravellers,”said Mr Zipfel. “We worked with the joint venture to help plan the deck construction sequence to ensure that the work was progressed in as many uniform and uninterrupted steps as possible.”

Despite the widening of the decks on the Swiss side of the bridge and skewed construction, the site team managed to maintain the weekly construction cycle throughout the cantilevering works.

Work on surfacing the bridge and fitting crash protection barriers to both decks is now well underway and the bridge is on schedule for its official opening later this year.