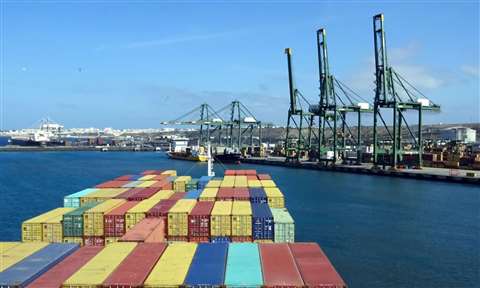 The port of Sines on Portugal’s western coast

The Portuguese government has announced a public tender for the Vasco da Gama Terminal at the port of Sines.

Chinese port operator Shanghai International Port Group (SIPG) is one of the companies expected to bid on the €640 million project.

In May, Portuguese minister of the sea, Anna Paul Vitorino, said, “The future Vasco da Gama Terminal, whose international tender will be launched soon, has attracted Chinese interest, as was demonstrated once again on Friday when Lu Hau, the minister of natural resources of the People’s Republic of China, visited the port of Sines to know all the details of the project and its future location.”

The 50-year concession contract calls for all financing for the project to come from the winning bidder, with the concession space remaining in the public domain.

The new terminal will have an annual holding capacity of 3.5 million TEU (twenty-foot-equivalent units)

The Portuguese government announced it will also be expanding the existing Terminal XXI at Sines, at an estimated cost of €547 million.

The project will see the terminal’s storage area expanded from 42 hectares to 60 hectares, increasing its capacity from 2.3 million TEU to 4.1 million TEU.

The scaling up of the port is part of the government’s Horizon 2026 initiative and will make Sines one of the world’s largest ports, with a total capacity of approximately 700 million TEU.