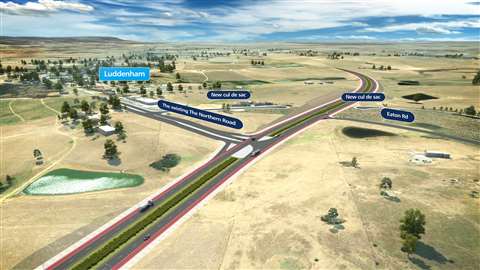 Artist’s impression of a section of The Northern Road upgrade project in Sydney, Australia

Cimic’s subsidiary CPB Contractors has been awarded a contract worth AUS$170 million (US$122.9 million), to deliver the next stage of The Northern Road upgrade in Sydney, Australia.

The company was selected for the construct-only contract by the Australian and New South Wales (NSW) governments as part of the AUS$1.6 billion (US$1.16 billion) The Northern Road upgrade project, which is itself part of the Western Sydney Infrastructure Plan, a AUS$3.6 billion (US$2.6 billion) programme to support integrated transport in the region and capitalise on the economic benefits from developing the Western Sydney Airport at Badgerys Creek.

This latest contract brings CPB Contractors’ work in the area to a total of AUS$210 million (US$151.97 million), following the selection of CPB Contractors, along with its joint venture partner, for the early earthworks package for Western Sydney Airport.

Cimic’s CEO, Michael Wright, said the construction programme would deliver high-quality road assets that are resilient to future needs, adding, “The Northern Road upgrade project will support the development of an upgraded road network and capitalise on the benefits from the new Western Sydney Airport at Badgerys Creek, which CPB Contractors is now proudly laying the foundations for with its JV partner.”

The Northern Road upgrade project will overhaul the road infrastructure between Littlefields Road in Luddenham and Glenmore Parkway in Glenmore Park. It includes upgrading 6.7km of road from two lanes to a divided four-lane configuration, with the provision of curbside bus lanes at each intersection.

Construction is scheduled to start in 2019 and conclude in 2022.