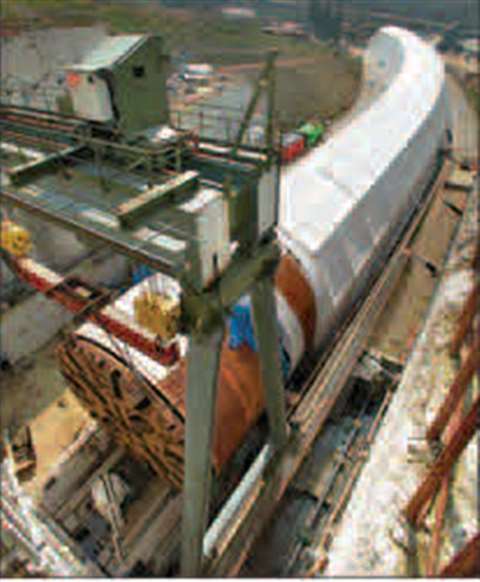 Work on completing the second 5,5 km long tunnel drive on the A86 West scheme got underway in June with the re-launch of the TBM northwards from Versailles.

By the time paris's first ring road the Periphique-was completed in the 1970s, traffic congestion had already increased and spread into the suburbs. Work started on a second ring road soon after the first was finished. Thirty years on, the outer road is still missing a vital link to the west of Paris between Rueil-Malmaison and Versailles, creating regular traffic jams during peak hours.

Work on closing the loop has been delayed by environmental and heritage issues but tunnelling innovation in the intervening years means that an end is now in sight. Cofiroute-a joint venture of Vinci, Eiffage and Colas-and main contractor Socatop, formed by the same shareholders, have just started work on the second drive of the A86 West tunnel.

Previous solutions for the road involved above ground construction, which had met with strong local opposition due to the area's mix of environmentally sensitive woodland and historical monuments, including the Palace of Versailles.

“The local geology-a mix of hard rock, clays and sands with perched groundwater-had made a tunnelled approach tricky until the mid 1990s,”said Cofiroute project engineer Cedric Laurier. “The innovation of tunnel boring machines (TBM) that can switch between earth pressure balance (EPB) and slurry support modes during a bore meant that a tunnelled solution for the A86 was possible.”

Under the € 1,3 billion scheme Socatop is constructing a 10 km long twin decked tunnel for cars to close the gap in the A86 ring road. Construction costs will be paid for through tolls during Cofiroute's 70 year concession. Cofiroute also has plans under development to construct a second 7,5 km € 700 million single level tunnel to the west to carry lorry traffic onto the nearby A12.

“The first section of the east tunnel between Rueil-Malmaison and the A13 is due to open in 2007. The second between the A13 Pont-Colbert interchange at Versailles will be complete in 2009,”said Mr Laurier.

“Completion of the scheme will cut the travel time between Rueil-Malmaison and Versaille from 45 minutes to just 10.”

No tunnelling project is straightforward but environmental issues, contractual problems and changing legislation have had a big impact on the scheme. “We first proposed the tunnelled solution in the late 1980s but it took a three year public inquiry to get the local population to support the scheme and led to design of the scheme's underground slip roads and interchanges,” said Mr Laurier.

Civils works for the scheme started in 1996 but work was put on hold soon after, and Cofiroute's contract was later cancelled when it emerged that the call for tenders was not advertised Europe-wide. The contract was re-awarded to Cofiroute in 1999. But by then France had established strict new laws on highway tunnel safety, following the Mont Blanc tunnel fire that claimed 39 lives, and even tighter European legislation was also introduced soon after. This meant design changes were needed to allow the work to proceed.

“We opted to separate the lorry traffic from cars by building two tunnels because there is a higher fire risk from goods vehicles. Also, by restricting the headroom in the east tunnel we could use a twin deck within a single bore, reducing the impact on the environment,”said Mr Laurier.

Cofiroute's solution for the eastern car only route is an 11,55 m outside diameter tunnel with separate decks for the north and south bound traffic, each with its own ventilation and extraction system. Each deck will have a clearance of 2,55 m but access will be restricted to vehicles with a maximum height of 2 m.

The two decks will be linked by stairwells every 200 m to provide emergency shelters to allow passengers to take refuge on another deck in case of an incident. “France's new tunnel safety legislation meant that the number of stairwells between the decks had to be doubled from the original design,”said Mr Laurier.

Access shafts every kilometre for emergency services are also being constructed along the route and, wherever possible, have been combined with ventilation shafts. “The shaft heads will be camouflaged with plants to help reduce their visual impact,” said Mr Laurier. “Even our temporary site offices at Rueil-Malmaison have been painted green to help them blend in.”

Work on site re-started in 2000 at RueilMalmaison with the launch of a 200 m long Herrenknecht tunnel boring machine on the first 4,5 km drive to the A13 interchange. Spoil from the first drive, delivered to the surface by conveyor, was shipped away from site by barges operating on the River Seine, which flows just a few hundred metres from the site.

The tunnel was advanced in 2 m sequences by 42 thrust jacks pushing against the pre-cast tunnel lining, which was installed immediately behind the TBM. The lining was formed by seven equal sized segments, each weighing 11 tonnes, locked into position by a key section. Progress of the tunnelling varied depending on the TBM's mode-up to 20 m per day was achieved with EPB and around 12 m per day in slurry mode. Installation of the pre-cast lower deck followed the progress of the TBM to improve access.

The TBM broke through into the A13 reception shaft in October 2003-slightly later than planned following a major fire near the tunnel face in March 2001. “The engine on the train used to deliver the tunnel linings overheated and caught fire,”said Mr Laurier. “No one was injured but it took five hours to get the blaze under control and delayed work on site by around three months.”

The tunnelling focus on the scheme has now shifted to the Pont-Colbert interchange following the re-launch of the TBM, now christened Emma, in early June. This 5,5 km drive northwards to the A13 junction will be the more difficult of the two as the bore passes within 15 to 20 m of the surface below the village of Viroflay and an SNCF rail line.

“Experience gained on the first drive will help with this more difficult stage of the tunnelling but we will proceed with caution and carefully monitor progress,”explained Mr Laurier.

Despite the re-launch of the TBM, activity in the Rueil-Malmaison to A13 section is still high. Since breakthrough, work on construction of alcoves for the stairwells and access shafts has been underway and called for ground freezing, where the tunnel passes through groundwater. Work on installing supports for the cast in-situ upper deck and technical gallery, that will house the extraction and ventilation, has also just started.

Elsewhere along the route, construction of the scheme's underground interchanges for both local and regional traffic is underway, mostly using cut and cover techniques.

“Safety on the scheme is complex but has been a top priority throughout,”said Mr Laurier. “We currently have up to 1500 people working on different elements of the tunnel at any one time.”

The first section of the A86 West tunnel is due to open to car traffic in just over two years but lorry traffic will have to wait slightly longer for the gap in Paris's outer ring road to be closed. According to Mr Laurier, there are at least another two years of design work to be carried out on the lorry tunnel before approval is gained, and then a five year build.