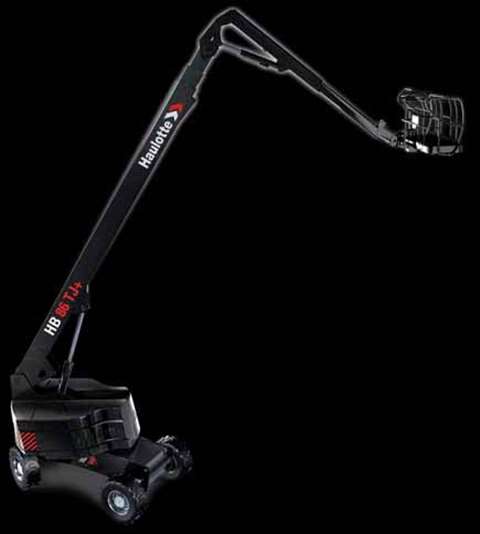 The telescoping boom and 16 feet telescoping jib of Haulotte's HB86 T J give it 86 feet of working height, as well as additional access flexiblity.

Like Europe's Bauma and Intermat shows, ConexpoCon/Agg is a massive global event, heavy on equipment launches and company news. American Lift & Handlers provides a guide to the companies exhibiting and the special events taking place.

With World of Concrete and the Rental Show folded, all eyes are now focused on Conexpo, North America's largest construction expo this year, on March 11-15, in Las Vegas. This year's show includes 2,000 exhibitors with more than 35 aerial work platform and rough terrain forklift suppliers from around the world.

Like the international shows Bauma and Intermat, this event only comes around once every three years, but it's a good chance for North American customers to see some new and unique products that may not be currently available stateside.

Haulotte made an absence at this year's the Rental Show, focusing its energies on Conexpo. The French-based company is bringing its new 86 foot working height, telescoping boom, the HB86 TJ, from France for the show. The machine features a 16 foot telescopic jib for additional access flexibility, the company says.

Also skipping out on what many view as the mast climbing event to launch new products, WoC, Alimak Hek is introducing new lines of modular work platforms and a new hoist.

Fresh off the heels of the Rental Show, MEC Aerial Platforms will be showing its first boom lift, the M40T, and its first mid-sized rough-terrain machine, the 43 feet working height 3772RT HD. The California company will also show two large, “green” electric scissor lifts, designed for the European market and launched for North America.

Telehandler offerings will be strong at Conexpo, with a “super” compact model from JLG and Genie will bring its updated GTH-5519 “European-style” machine. Something definitely new for North American buyers (and everyone else) is a compact telehandler from Spain's Ausa, a company far better known for its forklifts, dump trucks and concrete mixers. The T 204 H is Ausa's first ever telehandler – Ausa prefers to call it a forklift truck with telescoping arm – with a maximum load capacity of 2000 kg and maximum lifting height of 4.2 m.

Bigger machines from JCB, Skyjack's ZoomBoom models, Xtreme Manufacturing, and Pettibone will also be exhibiting. At the very top of new models, in terms of size, is the 23100 lb lift capacity MHT 10210 from Manitou, the first of its heavy-duty range of machines to be introduced to North America.

It's not just totally new products that deserve a visit. JLG, for example, has enhanced its ES scissors with reliability and maintenance features. It will also exhibit its LiftPod vertical mast unit that has been developed by its Australian subsidiary and not currently available in the US. JLG will also use Conexpo to launch its new telematics – “connected asset technology” – and there is likely to be some other news from the company.

Look out also for other foreign manufacturers that want to get in front of the large Conexpo crowds. These include hoist manufacturers Camac from Spain, and Raxtar (who made its debut at Hydro-Mobile's booth at WoC); Italy's compact equipment builder Hinowa; and compact vertical mast manufacturer Braviisol from Italy.

ALH provides a full guide to the lift and handler exhibitors below. ALH will also provide a full review of the new products launched its May/June issue. Stop by our stand number S-597 to pick up copies of the magazine, meet the editors and pick up other KHL Group magazines such as Access International, International Rental News, American Cranes & Transport and more. We hope to see you there.