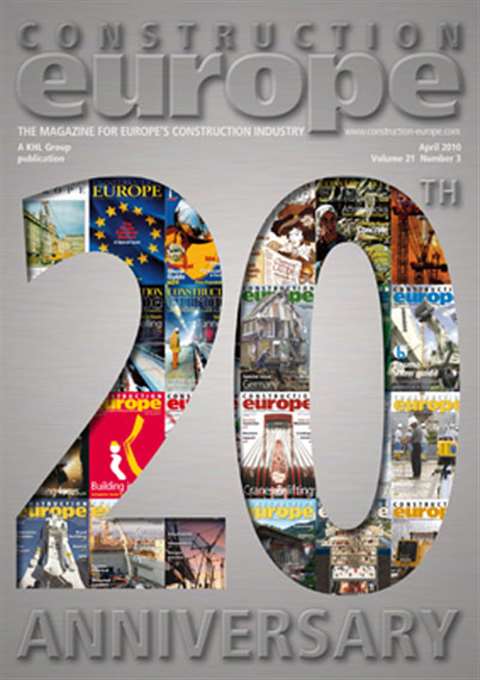 This month marks CE’s 20th birthday, with the first issue of the magazine being published in April 1990. Chris Sleight looks back over the magazine’s history and how the industry has changed in the last two decades.

Europe was a very different place 20 years ago, with the seeds of the region we see today only just sown. Democracy was gradually creeping into Eastern Europe and the reunification of Germany was tantalisingly close.

Indeed, back in 1990, the EU as we know it today did not even exist. At the time its forerunner, The European Economic Community (EEC or EC) was a 12-member club comprising Belgium, Denmark, France, West Germany, Greece, Ireland, Italy, Luxembourg, the Netherlands, Portugal, Spain and the UK.

Austria, Sweden and Finland would not join until 1995, following the formation of the EU in 1993 with the signing of the Maastricht Treaty to establish the so-called western European EU-15 group.

The greatest enlargement would come in 2004 following the signing of the Treaty of Nice in 2001 with the inclusion of Bulgaria, Cyprus, the Czech Republic, Estonia, Latvia, Lithuania, Poland, Malta, Slovakia and Slovenia. Bulgaria and Romania taking the tally of EU Member states to 27 in 2007.

Other major milestones along the way have included the introduction of The Euro - first as a theoretical currency to replace the European Currency Unit (ECU) in 1999, and then as real notes and coins to replace the national currencies of 12 Member States in 2002. The Euro-Zone has since expanded to 16 countries.

If Europe has changed out of all recognition over the last 20 years, then so has its construction industry. In 1990 major pieces of infrastructure such as the Storebælt Øresund Links were not even underway and the Channel Tunnel had barely reached the halfway point.

Today these connections are part of everyday life in a more connected an integrated Europe, but in 1990 the thought that you could cross a sea border without getting in a boat or plane was an extraordinary concept.

It was the fragmentation of Europe and the lack of good transport links across borders that led to the development of the Trans-European Network (TENs, TEN-T) transport project.

Initially conceived as 14 'priority' schemes that were adopted in 1996 - of which the Øresund Link was one - the project has since grown to encompass 30 major pieces of European infrastructure.

Unfortunately the political ambition of the TEN-T scheme was never matched by funding, which has led to persistent delays with almost all of the schemes compared to the original timetable.

Still, the policy has helped to deliver some of the most ambitious and technically demanding pieces of infrastructure ever conceived.

Included in the high-speed rail portions, for example, is the Gotthard Base Tunnel, which at 57 km will be the longest tunnel in the world when it is completed in 2017.

As well as infrastructure Europe has gained many landmark buildings over the last 20 years, including many of the structures and tourist attractions constructed to mark the turn of the Millennium - although some of these were notoriously late and over-budget.

All the same, the skylines of Europe's cities have been enhanced with some striking buildings over the last decade, from recent additions like the Torre Espacio and Torre Caja in Madrid to the tower blocks of the 1990's like those found in London's Canary Wharf or Frankfurt's business district.

It is not only Europe's built environment that has changed in the last two decades, the corporate landscape has also changed out of all recognition.

In 1990, many of today's largest contractors simply did not exist - companies like Vinci, Eiffage and all of the major Spanish groups had yet to be formed from mergers and acquisitions.

The same period has also seen a few names disappear from the industry - most notably Phillipp Holzmann, following its spectacular collapse in 1999.

But this scandal notwithstanding, the consistent corporate theme of the last two decades has been one of consolidation, be it in the contracting, materials producing or equipment manufacturing sectors.

As far as contractors are concerned, the big spurt in activity came in the late 1990s and early in the 21st century, when consolidators like Skanska and NCC became genuine regional, rather than national players. This was also the period when the likes of Acciona, ACS, Ferrovial and others were formed in Spain.

More recent years have seen other companies more active in the acquisition market - Balfour Beatty and Strabag are two names that spring to mind. There has also been consolidation in other more specialised sectors such as dredging and among UK house builders.

But perhaps the greatest changes have come in the materials sector's corporate landscape. Here a handful of names - CRH, Cemex, Heidelberg Cement,

Holcim and Lafarge - have emerged as the giants of the European sector, absorbing the likes of Aggregate Industries, Blue Circle, Cementbouw, Redland, RMC Rugby and Scancem along the way.

But it is perhaps the equipment sector where the disappearance of old, historic names has been most notable over the last 20 years, be they grand brands like O&K or more specialised manufacturers like Pel-Job.

In their place have come the new breed of multi-national, full-range manufacturers like CNH, Terex and Volvo to compete with established industry giants like Caterpillar and Komatsu.

But it has not all been about relentless consolidation. Some companies have gone full-circle in their thinking over the last 20 years.

Look at Ingersoll-Rand for example, in the 1990s it was building a significant presence in the construction equipment industry with the acquisition of Melroe (Bobcat) and Montabert to sit alongside its drilling business, established by founder Simon Ingersoll in 1871.

But by 2007 it had exited the construction equipment business all together, selling various businesses off to Atlas Copco, Doosan and Volvo.

There are similar examples in the contracting sector. Amec's acquisition of Spie in 1997 is one of the few examples of a UK company acquiring a contractor in mainland Europe, and looked like a move that would establish it as a serious pan-European player.

If the corporate landscape of the industry has changed over the last 20 years, it is due in part to the new challenges it faces. In 1990 no one talked about 'sustainability' and if anyone mentioned 'carbon' they were probably talking about buying some charcoal and having a barbeque.

But today the construction's environmental performance and the CO2 emissions related to the built-environment perhaps represent the biggest challenges the industry has ever faced.

It would be easy to be daunted by the task ahead were it not for the great strides the industry has taken in the last two decades. Workers enjoy safer working environments than ever before, with protection against harmful substances such as asbestos and lead, as well as lesser, but still serious health threats such as noise, vibration and emissions from machinery.

The industry has also demonstrated its ability to be pro-active in dealing with the 'big issues'. The example of the Cement Sustainability Initiative (CSI), instigated by the sector's major players under the auspices of the World Business Council for Sustainable Development (WBCSD) not only demonstrates the industry's desire to improve its performance, but also illustrates to others that it is better to be pro-active than wait to be regulated.

A more 'business-like' construction industry has been reflected over the years in the addition of articles on share prices, legal issues and business sentiment.

Meanwhile, the integration of Europe and the increase in the number of pan-European laws, codes of conduct and technical standards has seen trade associations like the European Construction Industry Federation (FIEC) and the Committee for European Construction Equipment (CECE) come to the fore as leading voices for the region's industry.

CE is pleased to continue to enjoy fruitful partnerships with both organisations.

Refinements to the design and content of the magazine over the years have of course been accompanied by technological advances. In 1997 the magazine's first website was launched, and like the paper magazine these early pages are unrecognisable from today's sophisticated site.

Another milestone came in 2003 with the launch of CE as a downloadable digital issue, an innovation that made it one of the first business-to-business magazines in Europe to be available in this format.

These days of course, if you don't have a digital issue, electronic newsletter like World Construction Week and a multi-media website, you're just not in the game.

A retrospective of the last 20 years inevitably raises the question of what the industry will look like in another two decades. 'Different' is the safe and certain answer.

The drive for better environmental performance looks assured, which will mean better insulated buildings and more efficient energy use. Whether this will lead to the widespread adoption of solar panels, wind generation and geothermal heating though is another question.

How we travel around Europe may also be different, with the current focus on high-speed rail networks set to challenge the dominance of the aircraft in short-haul international travel.

Engineers will be at the forefront of delivering this with the construction of new links across physical barriers such as mountains and seas.

And of course the 'household names' of the construction industry will be different in 20 years. It is significant that this year China is expected to overtake Japan as the world's second largest economy, but by 2030 it could well have overtaken the US as the most powerful country in the world.

European contractors will undoubtedly be using Chinese equipment and materials on their projects, and names like Liugong or XCMG could seem as familiar as Caterpillar or JCB. The question is whether they will be working alongside Chinese contractors too?

Last year saw the controversial award of two major road building projects in Poland to a consortium led by a state-owned Chinese contractor, with prices that would be suicidal for a commercially-focussed European.

It remains to be seen whether the future will bring a new era of co-operation between Europe and China, or whether relations will deteriorate to the level of a destructive trade war.

Construction Europe will follow this journey, and will continue to innovate. In 20 years you may be reading your news from a piece of paper, a computer screen, a portable electronic device or gizmo that wouldn't look out of place in an episode of Star Trek, but however you like to get your information, we will continue to deliver it.