Texas Central has announced that a design-build contract has been signed with the joint venture of Salini Impregilo and its US subsidiary, Lane Construction Corporation, for a high-speed train connecting Houston and Dallas in Texas, US. 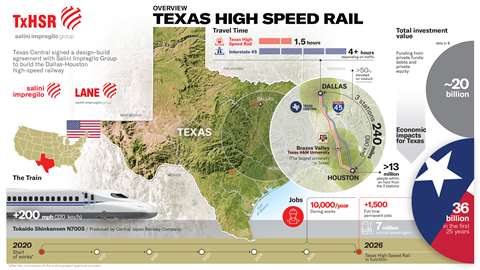 The project’s total investment is expected to be approximately US$20 billion with the civil works estimated at US$14 billion.

Work is scheduled to begin in 2020 - following the conclusion of the approval process for the project - and the high-speed rail is expected to be operational in 2026.

The project is expected to lead to the creation of 10,000 jobs per year during peak construction and 1,500 permanent jobs when fully operational.

Salini‐Lane is to supply the civil and infrastructure scope for the new high‐speed train service between Houston and Dallas. This includes the design and construction of the viaduct and embankment sections along the entire route, the installation of the track system and the alignment and construction of all buildings and services.

This design‐build agreement authorises a set of early works for the joint venture to continue advancing engineering design, detailed planning, interface definition and other key prerequisites necessary to start construction. This agreement is the result of their previous work providing front‐end engineering and design for the train’s civil infrastructure.

“This agreement brings us one step closer to beginning construction of the civil infrastructure segments of the project,” said Carlos F. Aguilar, CEO, Texas Central. “Salini‐Lane’s unmatched track record with rail infrastructure, and very specifically its world class high‐speed rail expertise across the globe, will be central to the completion of America’s first end to end high‐speed rail system.”

The Texas train will be based on Central Japan Railway’s Tokaido Shinkansen train system.