USA-based contractor Costello Dismantling is helping one of its customers, the utility company National Grid to create a new infrastructure to address efficient delivery of new energy sources. Part of this involved the recent demolition of the Walnut Street substation in the town of Haverhill, Massachusetts, in the north east of the country.

Built in the early 1920s, the facility was a historic electric switch house and distribution centre for that region of National Grid service, occupying three floors of a concrete building with brick façade. 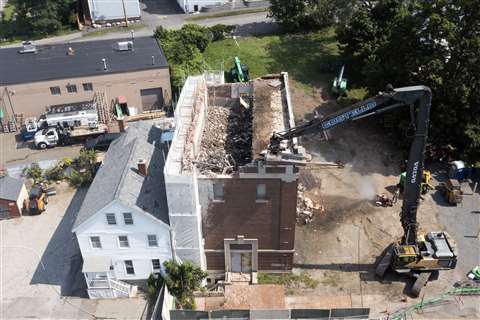 For Costello Dismantling, the major challenge in the demolition plan was a 1930s residential building only 1.2 m (4 ft) away from the substation.

The substation towered over the house and any resulting debris from demolition would certainly damage the neighbouring property. Instead, Costello submitted a demolition and remediation plan to National Grid for review. After considerable discussion between contractor, client and the neighbours, a fully comprehensive plan was ready for implementation.

Costello said the building was largely free of environmental contaminants before the start of the contract, but small amounts of asbestos and – typical for this type of building – PCB (polychlorinated biphenyl) contamination remained. The company removed the most difficult to manage PCB material using robotic grinding equipment in negative air containment, as well as traditional concrete chipping by hand. It also abated asbestos-containing waterproofing from the roof flashing prior to demolition. 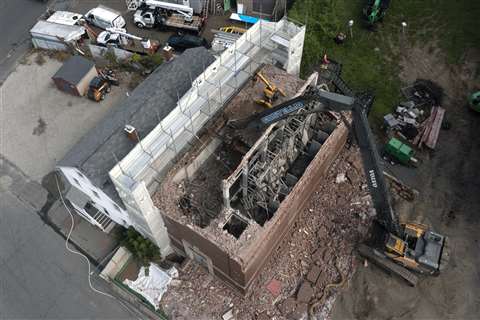 To eliminate dust and protect the neighbouring building, subcontractor Commonwealth Scaffold erected a three-story scaffolding system that wrapped around the side of the building closest to the adjacent house.

For safety reasons, Costello developed what it described as a “surgical” demolition plan that entailed careful demolition of the critical western bay with a robotic Brokk demolition tool.

This former substation was dismantled with no accidents, no damage to the adjacent building, and minimal disruption to the mostly residential neighbourhood.