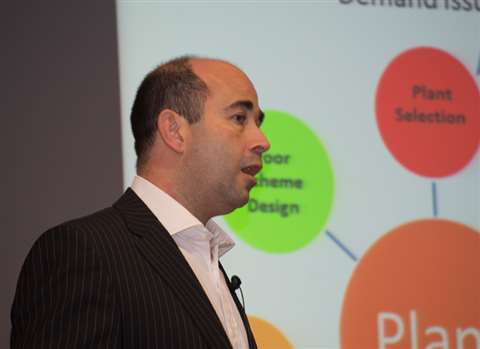 Delegates at this year’s Construction Plant-Hire Association (CPA) Conference heard a variety of high-profile speakers present information about the pipeline of projects for the industry, how to fill the skills gap, and the impact of technology on the construction sector.

Speaking at the event, which took place on 4 November, Highways England (HE) programme manager Phil Ellis highlighted a significant potential opportunity for the rental industry in terms of equipment demand in the coming years.

“The rapid Highways England spend increase has created issues around capacity and skills shortages,” he said.

“We are currently gathering information on key resource volumes in the market, including people, equipment and materials. We are also engaging in spatial modelling, trying to plan our schemes to be in proximity to other construction projects and resources.

“We want Highways England to become an intelligent client for the UK equipment market. We are trying to forecast the volume of different equipment that we will need over the next five to ten years,” He said.

But Mr Ellis said a major issue that HE had uncovered during its planning for the next phases of work was a skills shortage in the construction equipment sector.

However, a potential solution to this issue was presented by police constable Sonya Hill MBE, from the West Midlands Police and youth charity the Prince’s Trust.

Ms Hill told delegates about a scheme to rehabilitate young offenders through training. The idea was to assist them to secure employment within the construction sector by forging partnerships with blue chip contractors including Amey plc and Bam Construction.

This initiative, known as the Prince’s Trust Team Programme, is a 12-week youth engagement programme aimed at getting 16-25 year olds back into employment or education through personal development and mentoring.

The West Midlands Police is also working with organisations including CITB (Construction Industry Training Board) and CPA to bring achievable solutions to the skills shortage within the construction sector.

Ms Hill said, “It’s not just large companies we want to engage with – we are encouraging SME’s (small medium enterprises) to participate.

"By realising their CSR (Corporate Social Responsibility) footprint and committing to the CITB’s FIR (Be Fair Frame Work) and the CITB’s Go Construct campaign – together with the Prince’s Trust Team Programme, we have the potential to fill some of the thousands of Construction vacancies with previously undiscovered talent – everyone deserves a break and a second chance to realise their potential.”

Martin Frank, research engineer for specialist intelligent machines at manufacturer Volvo, told delegates that construction equipment fitted with technology such as partial drivetrain automation and site telematics had the potential to mitigate a large proportion of machine waste on a worksite.

“Intelligent components designed for machine control and optimisation help to control aspects such as speed, load, slope and position, and allow operators and equipment to perform tasks as efficiently as possible. Site connection technology enables the fleet, the material being handled, site capacity and production to be managed in real-time,” he told the conference.

He said technology could help fleet owners generate process understanding, collecting data to support the analysis of machine usage and site operation, helping to detect bottlenecks and wastage. “In the future, operators and machines will be one unit,” Mr Frank said.

And Glyn Matthews, head of strategy and engagement at UK rental company Speedy Hire, pointed out that people increasingly expect the same connectivity and functionality on-site that they are used to at home.

“People expect up-to-date information about plans, parts and jobs at their fingertips, with up-to-date technologies including image and location capture,” he said.

He also highlighted Radio-frequency identification (RFID) tabs as being of particular interest to the construction industry.

Mr Matthews designed Speedy’s ePod - an unmanned, self-contained, self-service rental portal that can be installed into buildings or shipping containers.

Delegates also heard a presentation from CPA technical consultant Tim Watson on preventing the unintended movement of equipment, as well as a talk from the Health and Safety Executive’s Gordon Crick on equipment and BIM, and from Skanska’s SamStacey on the future of construction.