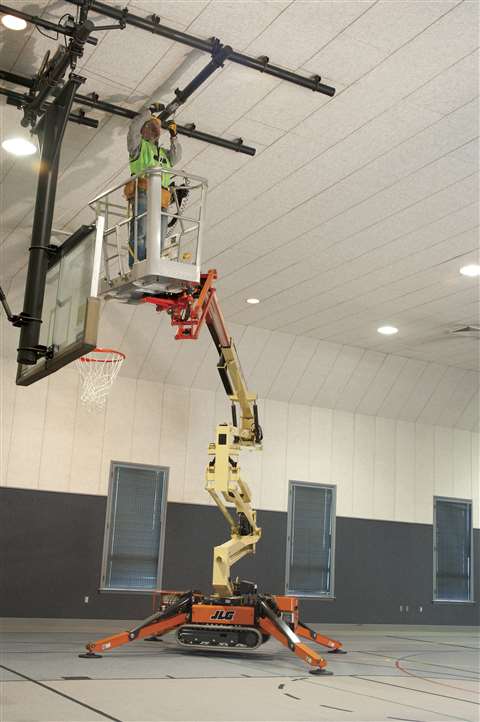 It has been two years since JLG started selling and dealing the Hinowa brand, pictured here.

Two years ago, the world’s largest manufacturer of aerial work platforms – JLG Industries, Inc. – announced it would start offering four Italian-built Hinowa models under the JLG brand worldwide. In the U.S., this caused murmurings good and bad. Previous Hinowa dealers would no longer be able to sell the platforms in America, but competitors viewed the news as positive; with a large OEM like JLG taking on a niche machine like Hinowa’s, it could bring awareness to these units. Because in the U.S., crawlers are still, well, learning to crawl.

“The U.S. market for compact [crawler] lifts is different from, say, Europe or Asia,” says Ebbe Christensen, president and chief executive officer of ReachMaster. ReachMaster was a former dealer of Hinowa units, but now represents Skako Lift, Inc., which includes ReachMaster Falcon, Bluelift and Denka compact aerial lift product lines. “Even in major U.S. cities that are considered over-crowded, space is still in abundance compared to their European counterparts. Furthermore, cultural and historical conditions have created a different demand for this type of equipment that cannot be duplicated here.”

Christensen says the European culture calls for stringent worker safety laws as well as a need to preserve existing structures. Both of these issues have brought forth legislation that regulates what types of AWPs can be used on certain jobs. In the U.S., however, alternative solutions are abundant.

“Historical buildings and layouts of century-old cities create a strong need for compact equipment,” Christensen says. “Anyone walking along the sidewalks and streets of Venice will know that standard lift equipment just won’t do.”

But after two years of selling JLG-branded Hinowas in the U.S., awareness is getting out into the market and the response has been positive, says Jeff Ford, JLG’s global AWP product director.

Overall, the industry agrees the market for niche, compact, track-mounted aerials is on the up-and-up and, Christensen says, most of the drive has come from an intensified supply and marketing effort from manufacturers.

“With more suppliers trying to enter the market and an almost generic need by major rental companies to focus on new high ROI segments, there’s no doubt the market is warming up – or waking up – to this type of equipment,” Christensen says.

For rental companies, which Ford says will be the largest buying group of niche, compact aerials, the benefits of these machines are far-reaching.

“Recently, as product awareness increases, we have experienced a new growth in construction applications where traditional lifts cannot gain access,” says Scott Reynolds, president of Teupen USA. “The compact, track-mounted solution is still a relatively new concept in North America and we remain very much in a product introduction phase.”

Reynolds says during this educational stage, it’s imperative to tout the machines’ versatility.

“The main application focus is on gaining access to locations where a rubber-tired lift is either too large in size (by weight and/or dimension) or where scaffolding is too disruptive or costly,” he says. “[Our] LEO Series is extremely compact – every machine can travel through a standard commercial double door and three models [can travel] through a single door. The machines all come standard with dual power systems which allow them to be used in both interior and exterior job applications. The outrigger design permits set up on slope and uneven or multi-level surfaces well beyond the capabilities of scissors or standard boom lifts. Once again – it is all about gaining access in the most efficient and economical fashion possible.”

Recently, Reynolds says, a Leo 23GT (75-foot lift) was rented by a rental partner for a week to perform lighting repairs in a downtown lobby. The cost was $7,000 for the weekly rental. “The customer was ecstatic because he had bid the project with the intent on using scaffolding with a cost of more than $18,000,” he says. “This deal offered the rental company an outstanding rental rate and provided the end customer with tremendous savings and a more efficient solution.”

Although tracked units can perform both indoor and out, it’s the tracks that offer the most versatility. For outdoor use, the units can assist in cleaning windows, tree care, light construction and building maintenance, amongst other applications. Inside, track-based units are just as flexible but certain size and weight limitations will narrow-down what can and cannot be used for an application.

“The most significant benefit is the ability to access applications via narrow passages or sensitive flooring with an available work envelope similar to that of a wider, higher ground bearing pressure electric boom lift,” Ford with JLG says.

For most units under 70 feet of working height, they are still small enough to fit through single doorways. The main challenge with these units is power supply. Given the compact nature of 70-foot-and-under lifts, some rely on standard, direct 110-volt power, while others might pack a battery or two into the chassis. Dual power is also an option.

“Dual power on some brands, including ours, gives tracked units sustained ability of outdoor operation and pollution-free power for indoor applications,” says Mike Hrycak, president of Tracked Lifts, Inc. Tracked Lifts is an importer and dealer of Omme and Platform Basket lifts. “The tracked undercarriage allows low impact passage over delicate floors, patios and turf, while allowing for driving on extremely sloped and diverse terrain. On top of that, [these] lifts can go through very tight passages accessible only to the most compact scissor lifts, but offer a far greater work envelope.”

For units above 70 feet of working height, they will typically need double doors to traverse through and weight becomes a factor. This also is a sector where wheel-based units can become more advantageous.

In the tracked lift arena, lots of new products will be introduced in the coming months. ReachMaster is debuting a new 42-foot track-based Bluelift in November. The company is also launching a new lithium-ion solution to its entire range of entry- and mid-sized track-based lifts. “We will offer the combination of both Lithium and combustion engine supplies on the same unit,” Christensen says.

Finally, ReachMaster is launching a 60-foot working height unit near the end of the year. It will have “features unseen on this size of lift,” Christensen teases.

Teupen has also introduced a new unit; a Leo 13GT (42-foot lift) with an integrated gas engine. “We also have a few additional products we look forward to unveiling at Bauma in April 2013,” Reynolds says. This year the company debuted the Leo 15GT Plus and Leo 25T Plus, and will also introduce a computer program titled Fuzzy 4 that will “continue to enhance the operator interface with our product.”

“The Teupen LEO series offers significant differentiation for the rental company with a great financial utilization,” Reynolds says. “At the end of the day, it also extends a better solution for the customer’s job needs.”

While some of the biggest users of tracked, niche lifts in the U.S. are those in the tree care industry (whether residential or commercial), individual facilities such as amusement parks, hotels, casinos, airports and the like come in a close second. “Large rental companies are still hesitant to displace their fleets of very diverse machines of every size and reach with more universal ones, but smaller independent ones willing to think outside the box are realizing the full potential of vastly simplified fleet of universal lifts,” Hyrcak says. “The tracked lift market is the most dynamically expending sector of aerial access industry and we expect it to further grow in the coming years.”

Reynolds echoes those growth sentiments, saying he expects another strong year of growth in 2013.

“We have doubled machine sales in each of the past two years and are targeting that same level of growth in the coming year,” Reynolds says. “We are still very much in the product introduction phase and are still developing the market. As the compact track lift gains more end user awareness, we expect even more rapid growth.”

Christensen, however, is more hesitant. “Everything looks good and promising, but so said the captain of the Titanic a few moments before the iceberg changed that observation,” he says.

“While the category for sure is on the rise, I will hold my breath a little and be a bit reserved and cautious as far as calling the market established. The category is still emerging and several brands and models still have to prove their stamina and even short term durability on American terms and soil. It is not enough to have performance; its use must be consistent and conceived as a positive experience whether it is a rental company or end-user. That said, I’m convinced that as more users is exposed to the safety of using smaller lifts compared to non-lift alternatives the market will continue to grow.”