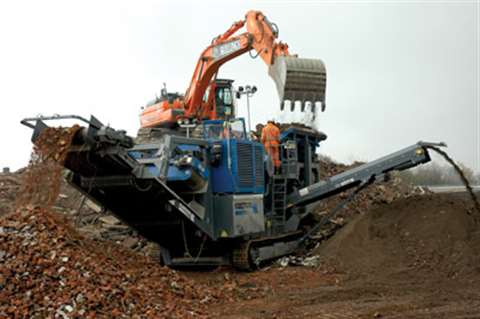 One of the clearest trends in the crushing and screening sector over recent years has been the move towards mobile equipment. The demolition and recycling sector has been a big driver, with the need for relatively compact machines that can be moved on site and set up quickly. When demolition work is complete in a few weeks or months, such units can be shipped off to the next job.

It is a different mentality to quarrying, where material is extracted and processed in one place of years, or more usually, decades. However, many quarries are also seeing the advantage of mobile machinery.

He is well placed to make this comment. The company has a long history in static crushing and screening equipment, but took a big step into the mainstream of mobile machinery last year with the acquisition of Extec and Fintec.

Sandvik previously operated in the heavy end of the SEK 18 billion (€ 1,94 billion) per year mobile crushing & screening equipment market. However, with the addition of Extec, which it describes as being in the medium-sized part of the market and Fintec at the light end, Mr Schultz said, "We can target a huge part of the sector now."

Sandvik estimates that using mobile crushers for in-pit primary crushing at the face can save about 20% of a quarry's running costs. After the first crushing stage, more mobile units can be used for further reduction & sizing in pit, or conveyor belts can be used to carry aggregates to a stationary plant. Either way, there are huge savings in loading and hauling costs.

Having said this, Sandvik still sees a future for traditional fixed plants. "Stationary plants will not disappear. In many quarries, because of tonnages, mineral types and layout they are the best solution," said Mr Schultz. "However, a lot of new quarries in the world are only running mobile crushers because the cost advantages are so dramatic."

Environmental considerations are a major factor in the mobile sector's development. Swedish- based quarry operator Perso Frakt has acquired a new Maskin Mekano Ls 1403 plant at its base near Lulea, replacing two older screening systems, to increase capacity and to maximise efficiency. "The number of staff around the machine can be halved, thanks to user friendly solutions such as easy one-person changes for the screening media," said quarry co-owner Emil Johansson.

"The machine is also compatible with our environmental awareness as it is electrically operated with low fuel consumption and emissions. The screening plant fulfils our requirements for increased production, reduced operating costs and efficient solutions and is the reason why we chose this machine."

The machine has already been put to the test in the depth of the northern Swedish winter, said Mr Johansson. "The weather conditions have been really bad and the screening plant is currently fed with a 0.8mm stockpiled crushed aggregate," he says. "The Ls 1403 splits the material into 5to 8mm, 1,5mm and 0,1mm without any problems."

"We have tested the Ls 1403 in the worst of conditions and it has exceeded all our expectations," added quarry manager Magnus Johansson.

For Skillings Crushing Company, based near Manchester, UK, the purchase of a second Kleeman track-mounted Mobcat MC 110 ZS jaw crusher has brought significant advantages in terms of productivity and safety.

"They're much quieter than comparable machines and operate with less vibration," said owner David Skillings. "It's an important consideration when you're working in urban areas. The crusher operates at a lower rpm, which means there's also a significant saving on diesel fuel. The machine features a pre-screen, before the crushing jaw. As a consequence you don't have to bring a separate piece of equipment onto the site specifically to screen the material before loading the crusher. "

The crusher's acquisition means the company will be able to "do more with less" according to Mr Skillings with savings in machinery, staff and fuel. "The Kleeman is a well-built machine and because vibration is low, it is also very stable, which means it's easy for operators to work on. That's important in today's health and safety conscious demolition environment."

When Austrian company Prajo won a major demolition in the heavily built up industrial area of St Marx in Vienna, it needed to recycle as much material on site as possible in order to cut transport costs. In three months a total of 40000 tonnes of structural and foundation concrete with heavy reinforcements needed to be broken and the site left level, and the combination of a Rubble Master RM80 impact crusher and an OS80 mobile oversize grain separator with re-feeding belt produced an average of 900 tonnes of 0/45mm grain every day. To achieve this the high-thoughput impact crusher was continually fed with pre-processed material up to 35mm.

Rubble Master says its Enviro package for noise and dust reduction, plus extra dust reduction with water jets and low emissions thanks to the diesel-electric drive concept with a low consumption motor keeps the impact on local residents and the environment to a minimum. "Work on this site is really free of problems," said site manager Bernhard Radinger. "This is the only way to stay on schedule and a larger crusher would not be practical." The RM80 produces grade certificate recycling building materials from cleanly separated aggregates that can be reused for construction on site.

Metso Minerals has complemented its Lokotrak range with the introduction of the new Lokotrak LT106 jaw plant, which according to the company, "takes crushing to new levels." Unveiled at ConExpo in March, the LT106 provides up to +10% more crushing efficiency, and is the successor to the LT105, bringing the number of basic models in the Lokotrak range to 30, from compact contractor models to quarrying units.

The C106 jaw crusher features a new frame and pitman structure, which Metso says minimises the stress levels within the machine without loss of crushing force. "Besides strength and performance, ease of use and serviceability have been prioritised during the development," said a spokesman. The Lokotrak 106 is powered by a 224kW Cat C9 Stage IIIA-compliant diesel engine.

The unit can be specified with either 6m3 or 9m3 feed hopper and optional equipment includes a longer, hydraulically folding discharge conveyor, radio remote controls, a magnetic separator and a high voltage generator. Its sister model, the Lokotrak LT106S also features a single-deck, detachable screen module, allowing the production of two aggregate grades in a single-stage crushing and screening process.

Fed via a two-deck pre-screen, the crusher is a four hammer open-style rotor and discharges onto a secondary pan feeder. It also has a primary feeder and a separate two-deck pre-screen. According to the company, a relatively low weight and compact dimensions mean the Fintec 1440 is transportable in a single load. Options include an over-band magnet for recycling and demolition applications and a dolly chassis for ease of transport.

"The machine is designed to deliver throughputs from 300 to 350 tonnes per hour in materials including granite, slate, limestone, brick and asphalt and is suitable for a wide variety of any applications such as secondary or fine crushing of softer rocks and in various demolition and recycling applications," said the company.

Besides Metso and Sandvik, the other major player in the crushing and screening sector is Terex, which owns the Powerscreen, Terex Finaly and Terex Pegson brands in the mobile sector as well as several US-focused manufacturers of fixed equipment.

New to the Powerscreen range this year was the Chieftain 1700 Rinser, a mid-sized, tracked screen available with two or three decks and fitting into the range between the Chieftain 1400 and new Chieftain 2100X. The machine is suitable for sand and gravel, coal and coke, crushed materials, slag and recycled materials, and produces up to four end products. Onboard side conveyors allow mid size and oversize products to be stockpiled, without the need for stand-alone conveyors.

Also new is the H5163 in Powerscreen's H range of horizontal screens. The triple deck screen has a triple shaft adjustable mechanism creating an elliptical motion, allowing the screen to be adjusted to the material being separated.

New to the Terex crushing portfolio is the Terex Pegson XA750. "Customers wanted an even larger crusher so we have delivered our largest crusher to date," said a company spokesman.

The unit is built around a Terex Jacques WJ3254 single toggle jaw crusher with an unrestricted feed opening of 1400 mm x 800 mm and a hydraulic closed side setting adjustment ranging from 75mm in recycling operations to 200mm in natural rock applications. The unit has a maximum capacity of 750 tonnes per hour depending on the application.

A hydrostatic drive provides precise control of the chamber speed ensuring the operator can vary the speed of the jaw for maximum throughput. This also enables the operator reverse the jaw to clear blockages. In any case, crushing in reverse is more suitable for certain recycling applications, which adds to the versatility of the machine.

Power comes from a 224 kW Cat C9 engine and the unit comes with a 5 m3 hopper as standard. Folding hydraulic extensions can be added to take this up to 8 m3.

Another interesting new mobile crusher is McCloskey International's first foray into the sector with its C50. Featuring a Telsmith jaw crusher at its heart, the machine is, according to company president Paschal McCloskey, a natural move for the mobile screen manufacturer

"As a leader in screening equipment we feel it's time we began delivering complete aggregate productivity solutions to our customers with a series of crushing plants. Just like McCloskey screening equipment, McCloskey crushers are designed to be the best choice for processors as well as the first choice of operators and technicians," he said.

The sheer number of new machines coming onto the European market in itself illustrates how popular mobile equipment has become. It may have been regarded as a niche 10 years ago, but such machines are clearly now mainstream products, with more and more contractors and quarry operators around the region ‘going mobile'.

Fixed plants clearly still have a place in the market. Particularly at the higher output end of the market, but with companies like Sandvik saying the savings with mobile plants can be +20%, the move towards mobility looks set to continue.