Precision lifting was required to lift 3 to 6 tonne concrete panels.

In January, Merkel Autokrane performed a project inside a production facility for precast concrete elements run by FTO Fertigteilwerk Obermain in Zweibrücken, Germany. To install a noise barrier with large concrete panels, Merkel made the choice to use the Demag AC 45 City. 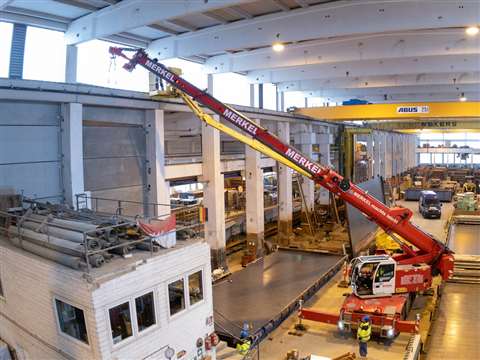 A Demag AC 45 City works inside a facility in Zweibrücken, Germany, lifting and placing concrete panels.

“What we had to do for this project was lift the concrete panels, each of which weighed either three or six tonnes, exactly in place between support columns inside the narrow shop floor so that assembly technicians could then fasten them in place there,” said Merkel Autokrane GmbH customer service representative Karl-Heinz Göring.

The goal was to separate two sections of the shop floor from each other in order to reduce the noise levels in both of them.

In addition to the already tight space inside the building, the lifts were more difficult due to various obstructions, including a crane runway. The first panels had to be placed underneath the runway, while the last series had to be positioned above it.

“To do this, we had to extend the boom until just underneath the ceiling,” said crane operator Oliver Lieb, who during the lift also had to look out for a large glass panel in which he had to stay clear. “However, that wouldn’t have worked with a hook, so we instead worked with the runner and telescoped under load. And in certain cases, it really came down to the last few centimeters.”

Extreme precision was required to position one of the topmost panels, which had to be threaded in directly behind a crane runway girder, Lieb said.

“Since there wasn’t enough space to set down the panel directly, we had to set it down on makeshift wooden supports, rig it again, lift it again, and then remove the supports to be able to set it down where we wanted,” Göring said.

Lieb was able to work with fully extended outriggers on the load side, but not always on the other side, depending on space conditions inside the building allowed for. The AC 45 City is equipped with the Flex Base, which allowed Lieb the to flexibility and use every inch of available space. Lieb was pleased with the crane’s operation.