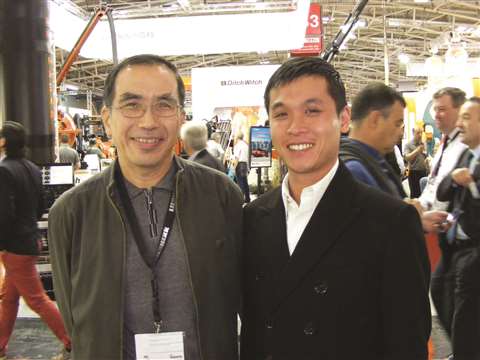 The powered access market in Singapore, and the surrounding region, is on the cusp of reinvention. Desmond Ong, CEO of the country’s biggest rental company Galmon, explains all to Euan Youdale.

Singapore has seen some major changes over recent years and is now a saturated market surrounded by countries that have little or no rental to speak of. It is also seeing stringent new standards being introduced, which will greatly affect the many small companies that are operating with little safety awareness and old, outdated equipment.

Meanwhile, Galmon is the biggest provider of AWPs in the country and South East Asia, and prides itself on working at a world class safety level. The company was founded in 1982 by Desmond Ong, who continues to lead the company as its CEO.

Mr Ong describes Galmon as a pioneer in the access sector, partly because it was the first rental company of its type in Asia, but mainly as a result of its mission to spread better working practices across the industry. This represents a tough challenge, as the country is only just adopting working at height standards, while the rest of the ASEAN Region is far behind with lower labour costs and an almost non-existent access market.

The company boasts a fleet of some 2,700 units, comprising a complete range of equipment, the vast majority of which are JLGs. Mr Ong puts the total number of AWPs operating in Singapore at near enough 9,000 units. Galmon has also been a distributor for JLG in Singapore since 1993, before which it specialised in machines from Mark Industries. Its compact tracked and wheeled units have been supplied by TCA for the last 15 years, while vehicle-mounted lifts come from Versalift & GSR.

“We used to cover more areas around Singapore for JLG, but it has set up its own dealerships in the region, so it’s kind of restrictive for us to sell machines there.” Now, the company is based firmly in Singapore, but does have an office in Malaysia.

In the absence of its own standards, Singapore importers have tended to recognise CE, ANSII and JIS (Japanese Industrial Standard) approved machines. “We predominantly adopt the ANSII standard, about 99% of machines,” says Mr Ong, “except Haulotte, which is using CE to come to Singapore.”

Times are changing, however, in Singapore. The new Workplace Safety and Health (Work at Heights) Regulations have been written into law by Singapore’s Ministry of Manpower. It is coupled with the Code of Practice for Work at Heights, both being introduced at the beginning of May this year.

The code of practice was originally set up in 2006 following a large number of accidents but only addressed general construction. “They have now split construction and working at height apart. The government has been bending strongly toward this since 2006 because of the fatalities from working at height,” explains Mr Ong. “Our Prime Minister Lee Hsien Loonghad set Singapore a target of 1.8 fatalities per 100,000 by 2018; so that is a huge milestone.”

It is the disparity in quality of aerial work platforms working in Sinpapore that has partly encouraged the new regulations. One of the causes of this influx of machines, some of which were sub-standard, was the introduction in 2008 of large-scale government projects to bolster the construction industry.

“At that time 90% of the machines in the country were being used, and we know that there were a lot of new companies coming into the sector,” explains Mr Ong, “And due to the recession in the US, there was an abundance of used machines there. Many of them were brought into Singapore, and the quality is now questionable. The choice is; you can have a great machine used by one of the best companies, or auction pieces which are junk.

“In 2010, after the major projects had finished, utilisations went down 50% - not just for us but for everyone. For companies from oversees this was alright because they just shipped the units out of Singapore.” As a consequence, rental rates have dropped from that peak period by 40% to 50%. “But fortunately our utilisation rate is now not too low because we had customers that were always loyal to us.”

During this difficult period Galmon kept its fleet mostly intact, and even had a programme of expansion, “We measured the fall, we did not get rid of a load of machines.” Mr Ong continues, “Rates are not actually the issue. When the rate has gone down, it is very hard to recover them. But a lot of our competition do not have a long term strategy and are just grabbing immediate opportunities as they come along; we, on the other hand, are looking long term, we don’t just supply as the order comes along.”

Despite the challenges Mr Ong puts Galmon’s year-on-year growth over the last two to three years of 20%. However, that is offset by the rental rate. “If I didn’t grow the business you would see my turnover drop 30% to 40%. But still we are not the cheapest in the market, in fact we are the most expensive in Singapore.”

The government’s eagerness to improve standards should help companies that offer more ‘expensive’ and higher quality services. As well as the code of practice, it is organising safety forums in the country, with speakers from neighbouring countries highlighting their needs in the region. “We have to maintain our standards: the Singapore standard states that every stakeholder in the pipeline is responsible, whether it be the end user, the site supervisor, the site project manager. In the past everybody wiped their hands of any responsibility,” says Mr Ong.

Galmon built its own trading centre last year. “Training is very important; often you will look at a photograph of equipment being abused and you cannot believe how a person can put themselves at risk like that. So, now with training we can see the level of standards has improved – operators understand the do’s and don’ts.

In the last 12 months the company has trained 4000 operators, and plans to continue at that level for the foreseeable future. “We use our own independant training similar to IPAF, and it is accredited by the Singapore government. “When the rules are fully employed, it will be good for us. We will do our best to adjust to the market. Those small players that are not really looking to quality, and with substandard maintenance, will gradually disappear.”

The next step will see the development of rental in the ASEAN Region, even though it is almost non-existent at present. “I think it is a matter of time, but they are not there yet. For example, in Vietnam the rental market is very small, in Thailand there is a little more, but in the rest of the countries, like Indonesia, I don’t see anything yet.

“Thirty years ago, when I started the company, my idea was to use Singapore as a base and go out to the region, but I found that is impossible back then. There are payment and protection issues and that is why we are based in Singapore. We have done some cross-border rental in the past, but we had to make special arrangements. Basically labour has been too cheap in our area, except of course Singapore, and there is a lot of wooden and bamboo scaffolding.”

Nevertheless, Galmon will look to its neighbours for future growth. “Singapore is a very mature market. There is growth because of rules and regulations, but our labour rate has gone up, as well as land and other general costs, and this will set the tone for the future.”

Mr Ong continues, “Singapore is small and Galmon alone has about 2,700 machines; the market is quite saturated here, so we must decide which countries to go into, but we do need to go.” The increasingly prominent ASEAN Free Trade Area (AFTA) agreement, originally signed in 1992, should help things along. Back then it had six members: Brunei, Indonesia, Malaysia, the Philippines, Singapore and Thailand. Vietnam joined in 1995, Laos and Myanmar in 1997 and Cambodia in 1999.

The primary goal of AFTA is to Increase ASEAN’s competitive edge. “Things will definitely change,” insists Mr Ong, “But it is a matter of time. Singapore is like a great door to the region; everyone is looking to Singapore for reference, but they won’t necessarily follow quickly, mainly because of national pride.”