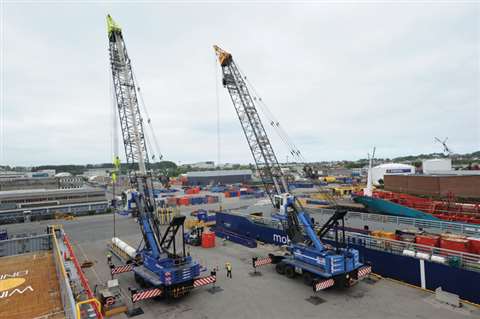 “For that reason, shipping lines tend to go for bigger ships [and] small ships are replaced by larger ships in all trade routes,” a spokesperson from Liebherr says. “This means ports around the world have to adapt their infrastructure and equipment. In many cases, they are looking for bigger cranes in order to handle bigger vessels.”

Currently the mega container vessels are 23 container rows wide. To help serve these giants of the seas, Liebherr Maritimes Cranes, based in Nenzing, Austria, launched the LHM 800, a 308 tonne capacity port crane that is capable of servicing 22 container rows across. It has a bulk handling capacity of up to 2,300 tonnes per hour, a 64 metre outreach and hoisting and lowering speed of up to 120 m per minute (or 38 containers per hour). This figure can be increased to 45 containers per hour when the crane is fitted with the Pactronic hybrid power booster system, the manufacturer claims.

For stability the LHM 800 it has an X-pattern undercarriage design and has a number of mounting options, including rubber tyres, a rail mounted portal, fixed pedestal or barge, the manufacturer says. For tandem lifts it has the Sycratronic tool, which is used to synchronise movement between the two cranes. The system works by allowing one crane driver to operate both cranes simultaneously.

Increasing orders
Improved port services are needed worldwide. Napier Port in new Zealand for example, has placed and order with Terex Port Solutions for two Terex Gottwald Model 6 mobile harbour cranes. The G HMK 6408 variant has a 100 tonne lifting capacity, a radius up to 51 m and maximum hoisting speed of 120 metres per minute. Both cranes are fitted with the Crane Data System and Remote Crane Access.

Garth Cowie, Napier Port chief executive officer, said, “Our crane fleet must adapt to ever increasing handling volumes and requirements. With the two new cranes, we are improving the availability and application possibilities of our handling equipment. In addition, the high tower variant enables us to accommodate the increasing number of ships with higher container stacks on deck.

The new mobile harbour cranes are due to be in operation in November 2015. They will be delivered with specially adapted chassis and will have an additional eighth axle and increased spacing of the twin axles to reduce the specific ground load.

Port investments are also being carried out at the DP World Australia, where two new Kalmar automatic stacking cranes (ASCs) have been ordered for its semi-automated terminal in Brisbane. The cranes will join a fleet of 14 Kalmar ASCs at Fisherman Islands Terminal, bringing the number of modules servicing container trade to eight. The new ASCs will be delivered fully erected in 2016 and will increase the capacity of the port by 14 % to 720,000 TEU. They are expected to be commissioned in January 2017.

Paul Scurrah, DP World Australia managing director and CEO, said, “Productivity at our Fisherman Islands Terminal has grown from strength to strength. In the past six months we have seen higher waterside productivity and a more consistent operational performance from our ASC and shuttle terminal. We are confident that trend will continue.”

Glenn Wayne, DP World Brisbane, general manager operations, adds, “The acquisition of the two new ASCs is expected to further improve our quayside productivity, while enabling a more efficient transfer of containers from our road side operation. It will also result in a 14 per cent increase in yard stacking capacity, while providing an additional five truck lanes which will further reduce truck turn times across all shifts.”

Port upgrades
Investment and port expansion projects are also underway throughout Europe. The Terminal de Contenidors de Barcelona (Barcelona Container Terminal or TCB) in Spain, for example, increased the height of its three Super Post Panamax cranes by 6 m, from 41 to 47 m, so they could service ships with up to 10 levels of dry-van containers on deck or nine levels of high-cube containers.

Carlos Larrañaga, TCB, general manager, says, “Innovation and the modernisation of our machinery are part of our commitment to adapt to the needs of the shipping lines calling at Barcelona. The enlargement allows us to meet the needs of the state-of-the-art large ships that are part of international routes. Every day we pursue efficiency, quality, safety and respect for the environment.”

In the UK, oil support service provider ASCO, based in Peterhead, Scotland, has also taken steps to upgrade the port ready for the new wave of large sea vessel, by adding two Sennebogen 6130 mobile harbour cranes. The 4-axle models were delivered by distributor E H Hassell & Sons to help with the increasing demand for vessel unloading at ASCO’s Peterhead Supply Base. They are fitted with two 20 tonne winches, an elevating cab, and are powered by a 354 kW diesel engine. Approximately 47 to 55 offshore vessels enter the Peterhead Supply Base in Scotland per week for loading and unloading, a company spokesperson said. Cargo ranges from food products to drilling and construction material for oil and gas extraction platforms.

Duncan Bell, ASCO operations manager, said “Previously the ships had to dock at specific berths depending on the material loaded and it was not a rare situation that the ship was also transferred several times. Today we move from one quay to the other within a few minutes. This is an immense saving in time and energy.”

Earlier this year in Antwerp, global logistics service provider Katoen Natie took delivery of a Liebherr LHM 600 with a capacity of 208 tonnes and an outreach of up to 58 m. The company now owns two of the models manufactured by Liebherr Maritime Cranes in Rostock, Germany.

The cranes will be used to unload break bulk cargo, including steel and forest products, and will also be used in heavy lift and project cargoes, for example, wind turbines.

Joos Melis, Katoen Natie commercial director, says, “Thanks to our two new LHM 600s we have expanded our portfolio and are now capable of lifting loads as heavy as 416 tonnes, which is unique in Belgium. We are very optimistic that these state-of-the-art giants in combination with our long-term experience in safe and efficient cargo handling will attract new customers. Our existing customers will also highly benefit from this significant investment as we have speeded up our vessel turnaround times.”

In addition to the two LHM 600, Katoen Natie also invested in an LHM 550 for container and bulk handling. It has the Pactronic hybrid power booster, which helps increase turnover capacity and reduce fuel and energy consumption. The company also operates a Liebherr type LHM 420 in Radicatel, France.