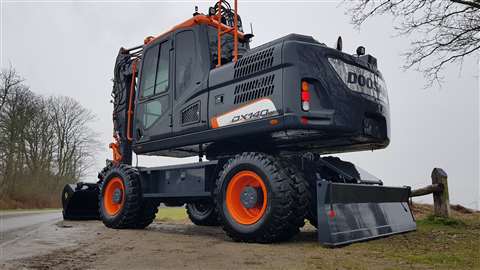 A special version of the DX140W-5 wheeled excavator was auctioned for charity at Intermat, Paris

Doosan Infracore Construction Equipment is celebrating the milestone of producing over 400,000 excavators, wheel loaders and articulated dump trucks (ADTs) for markets worldwide. To mark this, Doosan auctioned a unique version of one of the company’s excavators at the Intermat 2018 Exhibition in Paris, France.

This special version DX140W-5 wheeled excavator was auctioned online through Doosan’s dealers, with the winning bid announced at a function held on the Doosan stand. The successful bid was placed by Doosan’s Swedish dealer, DOOSIA.

A portion of the proceeds generated in the auction formed a charitable donation to the construction industry organisation, Fondation BTP PLUS, chosen by Doosan in France. A cheque for €10,000 was handed to Muriel Sanchez, General Delegate of Fondation BTP PLUS.

Fondation BTP PLUS subsidises innovative projects concerning employees, former employees or future employees in the Public Works Sector, promoting the autonomy of people and social promotion in the sector. Fondation BTP PLUS has provided support of more than €10 million for over 260 social construction projects.

Charlie Park, Charlie Park, Chief Executive Officer of Doosan Infracore Europe, said: “As a major global player in the field of construction machinery, we have always been committed about any social and solidarity action to support the men and women in the construction sector.

“Doosan was particularly impressed by the approach of Fondation BTP PLUS, which shares many of our values. To mark our meaningful achievement of 400,000 units of cumulative production this year, we created an exceptional event at Intermat in order to return the auction profits to Fondation BTP PLUS.”