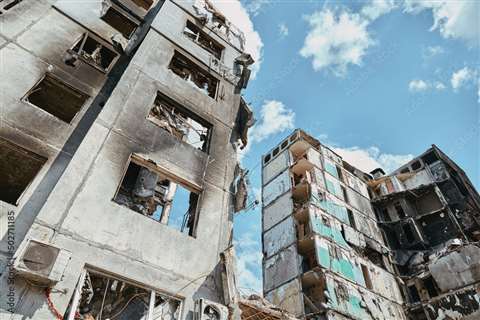 Damaged buildings in the city of Borodianka, Ukraine. (Photo: AdobeStock)

The report points out, however, that the forecast 3% drop for the Southeast region between now and 2024, comes on the back of five years of output growth.

Output in Eastern Europe, on the other hand, reached its peak in 2018, and had fallen approximately 10% from that peak even before Russia’s invasion of Ukraine.

Since that time, EECFA – which analyses the construction markets of 8 Eastern European countries – has not issued an forecasts for Ukraine itself.

Nonetheless, in what it describes as a ‘tragedy’ for Eastern European construction, the organisation predicts that the region (without Ukraine) will reach its bottom in 2023.

Looking at individual countries, the EECFA report highlights Romania as likely to experience a significant fall in output of 10% by 2024.

Conversely, Bulgaria is expected to see a growth in its construction market by the end of the year, which is set to continue in 2023 and 2024, at funding from the EU’s Recovery and Resilience Plan ramps up.

As for Ukraine, EECFA points remarks on the huge task ahead for the country’s rebuilding, with 74.1 million m2 of housing so far damaged or destroyed during the conflict, which represents 7.3% of the total housing stock.