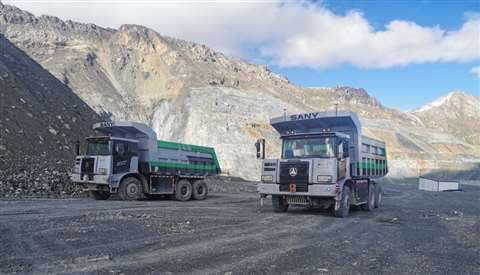 Chinese based OEM Sany has reported that in June of this year two electric unmanned SKT90E wide-body mining trucks successfully realised a connection with a 5G remote controlled excavator, meaning that the task could be completed with no danger to any operators.

The deviation of the horizontal control of the unmanned operation can be kept under 30cm and the truck can independently complete route-tracking, load and unload of materials, and parking.

The adoption of an electric power system solves the potential fuel shortage in the environment at high altitudes and the unmanned driving technology makes the operation safer in an area where landslides are common.

With the support of an integration of multiple sensing technologies including millimeter-wave radar, laser radar, and visual sensor, the truck can conduct the scanning and tracking of obstacles within 150m. It can also implement distance ranging and identification within 100m in response to different weathers in different seasons.

According to Sany, intelligent decision-making includes the automatic creation of a three-dimensional map of routes in the mine with laser radar, independent obstacle avoidance and track-followed driving and optimisation of driving routes.