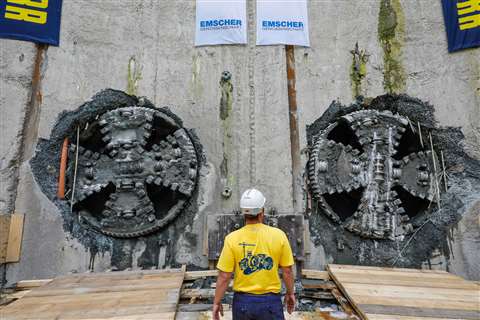 After chewing their way through 10km of earth to create the main collectors of construction section 40 of an Emschergenossenschaft environmental and sewage project, the last two tunnel boring machines (TBMs) have broken through into the target pit in Oberhausen-Biefang, Germany.

This marks the completion of the tunnel and pipe jacking work for the Emscher sewer, a project on behalf of water management association Emschergenossenschaft, which began in 1992.

In that time, a number of Herrenknecht tunnelling machines, along with a range of additional equipment, were used on the project.

Over the past three years, the two earth pressure balance (EPB) shields have been used by construction company Porr. Average machine availability was kept above 95% over the tunnelling period, according to Herrenknecht, with the result that up to 177m were covered per week.

The EPB shields used the segmental lining method, with twin tubes that had an inside diameter of 2.6m.

The logistics were adapted to the compact design of the tunnelling system, which measured about 85m in length. Excavated material was moved in buckets to the shaft by a locomotive, which also transported the finished segments to the tunnel face.

One particular challenge in construction section 40 was said to be the technically demanding tunnel alignment with several partially tight curve radii of up to 200m, which lay mostly below the A2 motorway and a multitude of inner city supply lines. In addition to this, the route ran through a 300m long geological fault zone with sandy and groundwater-bearing subsoil.

Other Herrenknecht technology that was used in construction sections 20, 30 and 40 included a number of AVN, or slurry machines, for pipe jacking, and a vertical shaft sinking machine (VSM).