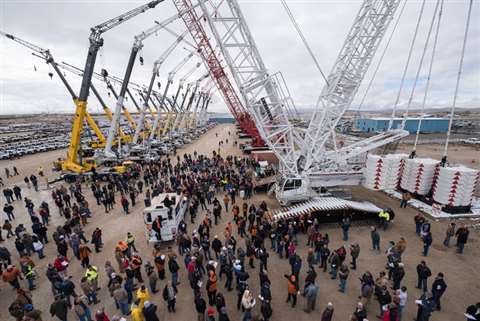 The Ritchie Bros auction of the Energy Transportation crane and transport equipment fleet brought in more than US$ 54 million on 25 March.

It was Ritchie’s largest single-owner auction and included more than 2,290 lots of cranes, trucks, trailers and associated equipment. The sale in Casper, Wyoming, USA, included 38 cranes, which sold for more than $35 million, Ritchie said. Equipment highlights included a 500 tonne capacity 2010 Liebherr LTM 1500-8.1 wheeled mobile telescopic crane that went for $3.35 million, making it the most expensive all terrain crane sold by Ritchie Bros. Close behind was A 600 tonne capacity 2011 Liebherr LR 1600/2 lattice boom crawler crane at $3.30 million. Next was a 450 tonne capacity 2013 Grove GMK7550 all terrain crane that sold for $2.73 million.

More than 3,000 bidders attended the unreserved auction, in person and on line, from 47 countries, Ritchie said. Around $43 million (78 %) of the equipment sold to buyers outside the state of Wyoming. Online bidders accounted for $20 million (36 %) of the total.

Ravi Saligram, Ritchie CEO, said, “Our extremely successful Casper auction, featuring high-quality cranes, trucks and trailers, is one of the largest underwritten complete dispersals the Company has ever done.”

McGlade said, “After 30-plus years building this company and this fleet, for me today is bittersweet. There’s an outstanding group of people who have built this company. NCSG will continue to employ this amazing team and continue to offer customers the same great service Energy Transportation has built its name on.”

The top highlights in the sale were as follows: