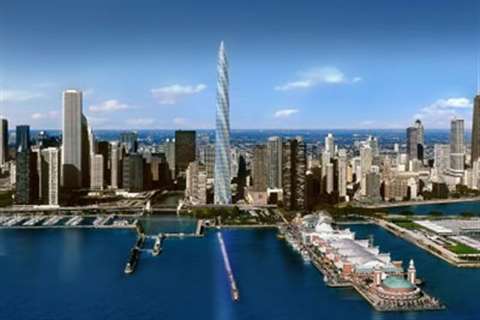 The Chicago Spire was to have stood 610 m high on the Lake Michigan shore.

Plans to build the tallest building in the Western Hemisphere have ground to a halt, with one of the financiers behind the Chicago Spire in Chicago, US foreclosing on its loan. The 1200 apartment tower designed by Santiago Calatrava was to have stood 2000 ft (609 m) on the city's Lake Michigan shore.

The spire was originally announced in 2006 following the acquisition of the land at 400 Lake Shore Drive in Chicago by Shelbourne's executive chairman, Garrett Kelleher. The structure was to have 124 storeys, plus an antenna that would take it above the Chicago's Sears Tower and the CN Tower in Toronto, Canada to be the largest freestanding structure in the Western Hemisphere.

The design by Santiago Calatrava was to feature the architect's trademark 'twisting' design, with each floor offset by a few degrees to provide a corkscrew effect. One of the most famous examples of this is the 'Turning Torso' tower in Malmö, Sweden.

Construction began in 2007, but there has been no activity on the site for some two years, with foundation construction suspended as pre-sales dried up following the collapse of Lehman Bros in September 2008.

However, some local news reports in Chicago say the site may still be developed by Shelbourne, perhaps as a more modest skyscraper.