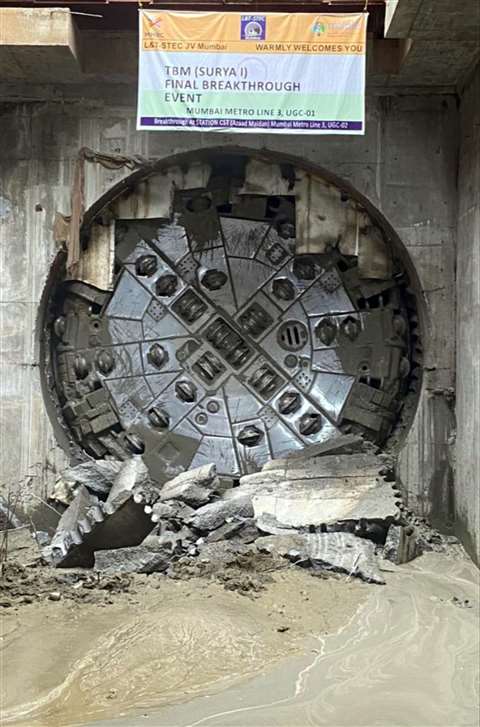 A 6.6m (21.8ft) diameter Robbins Crossover XRE TBM has made its third and final breakthrough for India’s Mumbai Metro Line 3. The project has an estimated cost of US$4.2 billion.

The crew and equipment had to overcome unpredictable terrain, high-pressure water ingress, and government-imposed lockdown orders during the Covid-19 pandemic.

The project is a joint venture between Larsen & Toubro and the Shanghai Tunnel Engineering Company.

The two custom-built machines were selected to bore parallel 2.9km (1.8 mile) tunnels between the Cuffe Parade station and CST stations, breaking through into several station sites along the way.

“It is the first time in India that Dual Mode, Crossover type TBMs equipped with a horizontal screw conveyor and high torque high speed (two-speed) cutterhead drives were used. Overall, the performance of the Crossover TBMs was found satisfactory and we are in the process of shifting these TBMs for the L&T Chennai Metro project,” said Palwinder Singh, head of tunnel construction for the L&T – STEC JV.

In another first for India, the Crossover TBMs employed a unique technique in a 554m (1,820 ft) long section from Hutatma Chowk to CST stations. They were used in the benching of the NATM Platform tunnel through basalt rock (removal of the bottom section of rock remaining in the station after conventionally removing the top section).

As the financial capital of India and one of the most populated cities in the world, Mumbai is faced with an excessive amount of road traffic. It currently takes up to two hours to drive the 25km (15mi) distance from Cuffe Parade to the airport – the same trip on the finished metro will take 50 minutes.

The completion of Mumbai Metro Line 3, which is expected in 2025, will save residents transit time and is expected to initially decrease road traffic in the area by 35%, reducing daily fuel consumption by 460,000 liters.