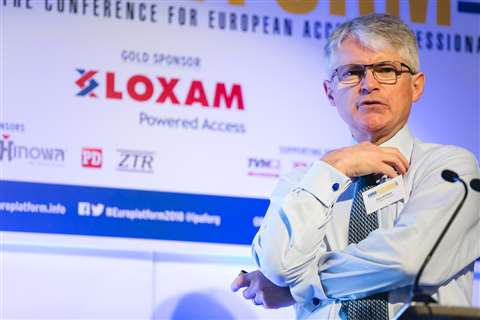 Adopting advanced technologies, embracing change, utilising and analysing big data and most importantly relying on a skilled and highly engaged and energised workforce are all key to a successful and sustainable business model and enhancing safety in the powered access rental market, was the key message at this year’s Europlatform.

Hosted by the International Powered Access Federation (IPAF) in association with Access International magazine at the Europa Hotel in Belfast, Northern Ireland, the conference heard keynote speaker Don Kenny, CEO of Loxam Powered Access Division, say: “Change is the only constant, but are we making progress? It’s evolve and survive or stagnate and die. Success is fun and infectious, but losing isn’t so much fun.”

He challenged the record number of almost 150 attendees to consider “how do you work nationally, and deliver locally? Treat the customers differently, give them something they want”, but added that innovation also has to fit the business model: “Those of us running powered access rental businesses cannot afford to be ‘blue sky thinkers’. We have to run our businesses as they are today – but that doesn’t mean we must resist change.”

The theme was enthusiastically taken up by Brad Boehler, President of Skyjack, who talked about the challenge of “flatlining productivity” in global construction, and how Mobile Elevating Work Platform (MEWP) manufacturers can help redesign the work site of the future to increase productivity and safety at the same time.

Identifying technological trends that can help with this, he added, citing augmented (AR) and virtual reality (VR), wearable and smart tech, drones and better connectivity (including telematics) and robotics. He touched on the fact that both Skyjack and IPAF now have MEWPs available as 3D BIM models, and IPAF’s forthcoming VR consultation paper. Above all a deluge of data could drive enhanced and real-time tracking of stats such as real utilisation rates, or alert equipment owners of overturns or even near misses that may otherwise go unreported, he posited. 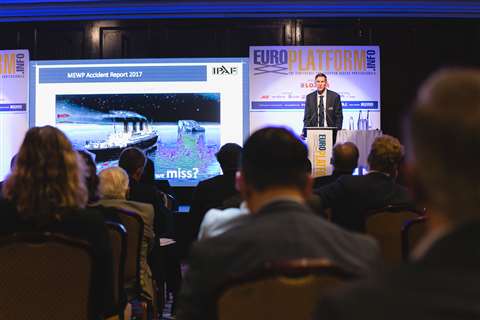 On the importance of data and accident reporting, Andrew Delahunt, IPAF Technical & Safety Director, announced IPAF’s latest Fatal Injury Rate (FIR) analysis for 2017. While the number of fatalities rose from 66 in 2016 to 83 last year, this was owing in no small part to greatly enhanced reporting of accidents and fatalities via IPAF’s ongoing incident reporting project, he pointed out. There were nonetheless concerning aspects to the analysis, he added, not least when broken down by causes and geographical occurrence of MEWP accidents leading to fatalities.

The commonest cause of deaths in 2017 was electrocutions, taking over from falls from the platform in 2016, and countries that saw a spike in the number of fatalities included Spain, France, Italy and the US. The US, while it has around 43% of the global MEWP fleet within its borders, saw the percentage of total reported fatalities rise to more than 80%. Andrew Delahunt confirmed that IPAF would adapt its safety and training programmes to address these concerning trends.

Kjell Inge Olsen, Organisation Manager at Naboen AS, also echoed the words of Norty Turner and Don Kelly regarding the secrets to growing a successful business in powered access. Naboen means neighbour in Norwegian, he said, and talked about how the rental company used the principle of neighbourliness to grow from a single depot in Stavanger to become one of Norway’s largest rental businesses with nine branches today.

The right people, being nimble and decisive and creating a brand identity that people know and trust have been key, he said, with the majority of the expansion happening between 2010-2015. “Growing can be hard,” he concluded, adding that you have to train and develop staff well. Team-building and customer relations are an integral part of Naboen’s success – “It’s not the machinery, it’s the people,” he concluded, adding that the company’s “global” expansion plan for the near future includes… neighbouring Sweden and Finland!

The morning session was rounded off by Euan Youdale, editor of event media partner and official magazine of IPAF Access International, talking about the magazine’s latest Access50 power listing of the world’s top rental companies by MEWP fleet size – with 31 of the leading 50 firms all being IPAF members. He also gave an overview of the largely positive trends identified in the 2018 Global Powered Access Rental Market Report, compiled exclusively for IPAF by Ducker Worldwide. 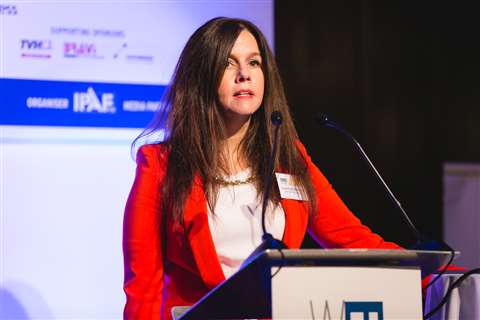 The afternoon session began with Julie Houston-Smyth, Director of Highway Plant Co and Chair of the IPAF Irish Council, shared her personal story of what life was like starting out as a woman in the powered access rental business in a family firm founded in Northern Ireland at the height of the Troubles.

The business was started by her father after he was made redundant by an equipment manufacturer. She joined in 1993 on a six-month trial basis, and now has over 25 years’ experience in the industry. “I started as a sales rep, and on day one I visited a construction site and stuck out like a sore thumb. I was laughed out of the place, but the next day I went back and won the business; that client is now one of Highway’s longest-standing customers,” she said.

She also gave a fascinating and harrowing insight into the perils of running any kind of construction plant hire business in Northern Ireland during times of strife, with unbranded machines often being delivered in the dead of night by unmarked lorries to avoid becoming a target for one faction or another. How times have changed, though uncertainties persist across the island of Ireland with no government in Stormont, Northern Ireland’s devolved assembly, and the thorny issue of how Brexit may effect the Irish border still being unresolved.

Ian Cameron of Diesel Progress International magazine gave his insights into the future of diesel power in off-highway uses, and said that as efficiency and emissions technology advances, he sees it “being with us for a long time to come”, adding that reports of the death of diesel as a power source could be premature.

Norty Turner commented that he couldn’t see contractors universally accepting higher rental rates to pay for the higher machine costs of more sophisticated hybrids and electric powrered MEWPs, but that a move to greener construction methods would eventually prevail “probably starting in Scandinavia, and filtering down through northern Europe and around the globe”.

John Ball welcomed the capabilities of new clean machines, but said he hoped they weren’t imposed by regulators or adopted too quickly as the MEWP rental industry is “underpinned by the residual value of machines”.

Arnold Grootveld said he wasn’t too worried about a damaging environmental legacy arising from needing to dispose of spent batteries, adding that newer batteries especially those featuring lithium technology had a lifespan of up to 50 years, as opposed to four or five for standard lead-acid batteries.

Stéphane Hubert added: “We are speeding up development as the growing maturity of the technology and design capabilities of electrification partners throughout the world are allowing Haulotte to speed up our programmes in this regard.”

Stéphane Hubert also signed an agreement in advance of the conference that made Haulotte the first MEWP manufacturer to become a sustaining member of IPAF. The date and location of the next edition of the event was also announced mid-conference in Belfast, with Europlatform 2019 being confirmed for 3 October in Nice, France.