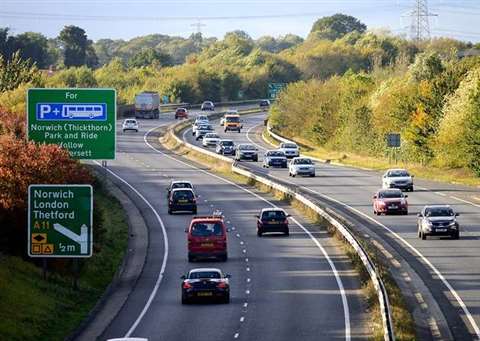 Galliford Try has become the latest contractor to win two major road upgrades as part of Highways England’s plan to carry out up to £8.7 billion (€9.85 billion) of work on England’s motorways and major roads.

The UK-based contractor has signed contracts worth £435 million (€492.8 million) to deliver two major road upgrades – the A47 corridor improvement programme around Norwich and Peterborough and the Sparkford to Ilchester dual-carriageway scheme along the A303 corridor in Somerset.

The announcement follows two earlier contract awards – £61.4 million (€69.6 million) to Geoffrey Osborne to upgrade the A46 at Binley in Coventry, and £52.4 million (€59.4 million) with VolkerFitzpatrick to deliver a series of improvements along the A27 near Lewes in East Sussex.

The deals have been set up using the Routes to Market Regional Delivery Partnership, with the 13 companies – known as Delivery Integration Partners (DIPs) – working on 18 packages of schemes across the country.

Duncan Elliott, Managing Director of Galliford Try Highways, said, “The appointment underlines the strategic importance of highways to our construction business and the vast experience, expertise and resource we can offer in this sector.”

Three sections along the A47 road will be upgraded to dual carriageway and two junction improvements will also be implemented. Subject to planning consent, the programme is scheduled to be completed in 2024.

In Cambridgeshire, approximately 1.5 miles of the A47 between Wansford and Sutton will be upgraded to dual carriageway and there will be an improvement of the roundabout at the A47/ A141 junction in Guyhirn.

The A303 Sparkford to Ilchester scheme is currently waiting for planning consent and due to start construction in March 2020. The plan is to dual a three-mile single carriageway section of the A303 between Sparkford and Ilchester, with grade separated two-level junction access.