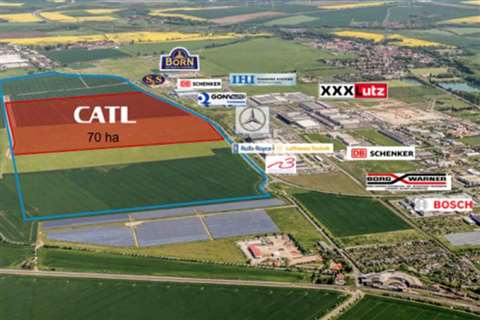 An illustration of the CATL battery plant in Thuringia, Germany

Chinese battery manufacturer, Contemporary Amperex Technology Co. Ltd (CATL) has broken ground on a new production facility in Germany – its first ever outside of China.

The €1.8 billion battery cell plant will be situated near Erfurt, capital of the central state of Thuringia, with production expected to commence early in 2022.

Initially, the 70-hectare plant will have a capacity of 14 GWh, with a later planned expansion up to 24 GWh.

It is reported that CATL’s choice of location for the facility is due to its proximity to German car manufacturers; the company has partnerships with many of the largest manufacturers in Europe, including Renault, BMW, VW, Daimler and Volvo.

At the ground-breaking ceremony, Thuringia’s economics minister Wolfgang Tiefensee said, “For Thuringia, the establishment of CATL is one of the most important industrial investments of recent decades.”

Matthias Zentgraf, CATL’s co-president for Europe, said, “We believe that the combination of Germany’s industrial tradition and CATL’s tradition of innovative battery technology will greatly accelerate the electrification of the automotive industry in Europe.”